You are here: Home / Zon / Espresso on a Boat 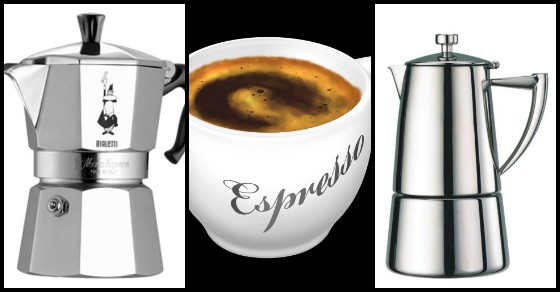 I’ll start with a confession:  I’m not an espresso drinker.  But here’s the good news:  lots of TBG readers are, and several have shared their favorite espresso makers with me to post here.

For those who, like me, aren’t familiar with espresso, Wikipedia defines it as “coffee brewed by forcing a small amount of nearly boiling water under pressure through finely ground coffee beans. Espresso is generally thicker than coffee brewed by other methods, has a higher concentration of suspended and dissolved solids, and has crema (a creamy foam) on top.”  One “cup” of espresso is usually 2 ounces.

Espresso makers run the gamut from fairly simple and relatively inexpensive (less than $30) to complex machines with price tags in the thousands.  I’ve arranged the ones that readers have recommended roughly in order of least expensive to most expensive.  Some require you to boil water separately, a few are stovetop units and one is electric, but 12 volts.

One note — most of the less expensive units do not use high pressure to force the water through the ground coffee and thus technically don’t produce espresso.  In fact, few home machines use the really high pressure that coffee shops do and thus don’t develop as much crema.  I’ve provided a photo of each and links to purchase.

Aeropress:  I’ve written about the Aeropress before, and many cruisers use it to make coffee as well as espresso.  It is one of the most simple espresso makers to use and does not require electricity.  Water is boiled separately and the biggest complaint is that the unit is very tall and tippy.  It uses manual pressure to force the water though the grounds (and a filter).  See the Aeropress on Amazon.

Bialetti Moka Express Stove Top Percolator:  Several people have noted that this is not actually an espresso maker, as it doesn’t use pressure.  As it perks, the water goes from the lower chamber thru the grounds to the upper chamber.  You have to be careful to take it off the stove soon when the water is all gone from the bottom chamber.  Several people tell me that they think it makes better “almost espresso” than the Cuisinox (below) which costs almost 3 times as much — but this percolator is aluminum while the Cuisinox is stainless.  See the Bialetti on Amazon or watch a video on making coffee with it.

Cuisinox Roma:  This is a very pretty percolator, made of 18/10 stainless (see my article on stainless grades) and it gets very good marks for making a cup of “almost espresso.”  It works the same way as the Bialetti.  Many people don’t want to cook something acidic in aluminum and see this as an excellent alternative to the Bialetti for that reason.  See the Cuisinox on Amazon or watch a video on using it (the procedure is identical to the Bialetti).

Handpresso:  This comes from reader Nuno Antunes, who says it makes great (true) espresso and is totally manual.  Water is separately heated, the unit is hand pumped and you have to use E.S.E. coffee pods.  Since the grounds are in a pod, clean up is very easy. Nuno said that the biggest disadvantage with the Handpresso is that if you have guests, it just takes too long to make a cup for everyone.

Amazon reviews say that the Handpresso produces a much truer espresso than the Aeropress, clean up is much simpler and it’s smaller — but it costs quite a bit more!  It’s the least expensive “true” espresso maker (using 16 bar of pressure) that anyone recommended.  The small size is also a big plus!  See the Handpresso on Amazon (Amazon also sells the pods) or watch a video showing how it works.  See the European Handpresso site.

ROK Espresso Maker: Also recommended by Nuno and also manual with a separate source of hot water; it does not require pods, so you don’t have to worry about availability.  The down side is that you have to get the grind and tamp just right, which takes a bit of learning for most people, but it does develop about 10 bars of pressure and noticeable crema.  You have to preheat the unit so that hot water doesn’t cool off too much in the brewing process.  Reviews on Amazon are mixed; I think there is a greater learning curve with this than the Handpresso.  To be honest, after watching this demo video, it doesn’t look particularly boat-friendly.  See the ROK on Amazon; many reviewers on Amazon and elsewhere suggest getting a separate tamper (49 mm).

Nuno also recommended the Espresso 12, a 12-volt unit that is apparently available only in Europe (at least I couldn’t find any US sources).  He says it “makes an excellent espresso and it’s quite strongly built. The form makes it simple to fasten in on a bulkhead.”

Additionally, I should note that one reader recommended the Breville Barista Express with grinder, which uses 110 volt power and while considered a mid-price home espresso machine is on the large and expensive side for most boaters.  It does produce the high pressure (15 bar) needed for true espresso, however.  Another recommended the Bellman Stovetop Espresso Maker which does not need electricity and can develop about 5 bar of pressure (the instructions say to use 1.5 but users say they can get 5); it gets mixed reviews, producing a good cup of espresso but being futzy to use and a pain to clean.  At nearly $200, I’d also call it on the expensive side for something that seems hard to use and clean.

Any other recommendations for an espresso maker?  Has anyone tried the Keurig Rivo or the Nespresso?  I’ve seen ads for both and they seem to get good reviews, but no one has commented yet about how satisfied they are — particularly for boat use.

768 Shares
Some links above (including all Amazon links) are affiliate links, meaning that I earn from qualifying purchases. Learn more.