You are here: Home / Other / What Do You Do When You Need Half an Egg? 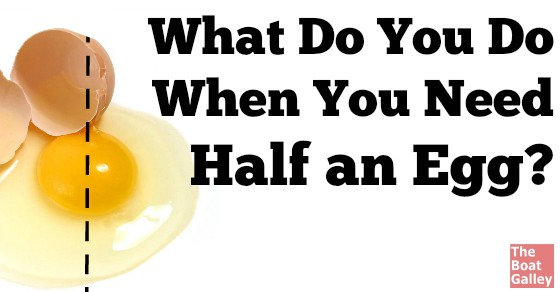 Many times, you want to only make half a recipe.  But the full recipe calls for an odd number of eggs, such as 1 or 3.  How do you cut an egg in half?

Well, you could measure it and then only use half the amount.  Or you could use just the white or just the yolk.  This always seems wasteful to me, so I came up with another method (note that this only works for recipes that also have some other liquid in them):

I break an egg into a measuring cup, then add enough milk to total 1/2 cup for the two.  Add it to the other ingredients as called for in the recipe.

Here’s an example using 3 eggs and 1 cup of water in the original:

I’ve used this in lots of recipes to make them into a reasonable size for two people and never had a problem as long as there was another liquid in the recipe.

Let me know if this works for you!

584 Shares
Some links above (including all Amazon links) are affiliate links, meaning that I earn from qualifying purchases. Learn more.