You are here: Home / Uncategorized / Egg Cartons on a Boat 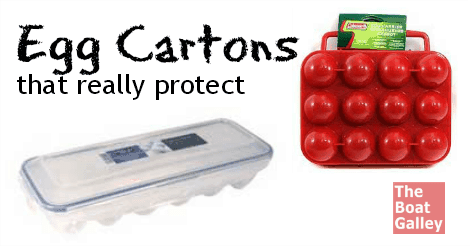 Storing your eggs on a boat isn’t quite as straightforward as ashore.  Whether you’re putting them in your refrigerator, a cooler or keeping them at room temperature (only if they’ve never been refrigerated), they need more protection against breakage.

So what works best?

Lock & Lock Egg Containers. The Lock & Lock containers, pictured, are my choice.  I’ve never seen them in a local store (but then, I’m in a town of 20,000 people).  Amazon sells them and occasionally other online vendors.

A few readers have complained that their eggs got moldy in these and they had to drill a small hole in each egg compartment to avoid this (which negates the benefit of a cracked egg being contained). Most don’t have this problem and I don’t know why some do.

See these on Amazon

Egg Containers. Most of us have probably seen the Coleman Camping Egg Containers (the one I had for years was green).  You can find them in every camping department — Walmart, Target and any other place you care to look.

These are better than using styrofoam or cardboard egg cartons, but not nearly as good as the Lock & Locks — and at least where I live, they only cost about 50 cents less!

They have the same advantages of protecting the eggs if you want to put something on top of them and also being easy to clean.  But —

Styrofoam Egg Cartons. While styrofoam cartons are better than cardboard ones when it comes to cleaning them — you can wash them and use bleach water on them — they just don’t protect eggs that well.  I’ve noticed at my grocery store that it seems like there’s more likely to be a cracked or broken egg in a dozen in a styrofoam carton, and asked the dairy manager if that was really true or just my perception.  He said that they have 3 or 4 times the breakage in styrofoam cartons as in cardboard!

The other disadvantages are of course that there’s no seal on the carton, so if an egg breaks, the mess is likely to get all over other things and that the carton pops open easily.

Cardboard Egg Cartons. They protect the eggs better than styrofoam, but nowhere near as well as the plastic options.  You can’t wash them out, they may harbor bugs, and they tend to pop open with the motion of the boat.  And don’t think about using them in a cooler — any sloshing water from melted ice will just destroy them!

542 Shares
Some links in this article (including all Amazon links) are affiliate links, meaning that we earn from qualifying purchases.