You are here: Home / Food & Cooking / Four Easy Ways to Conserve Water When Living on a Boat 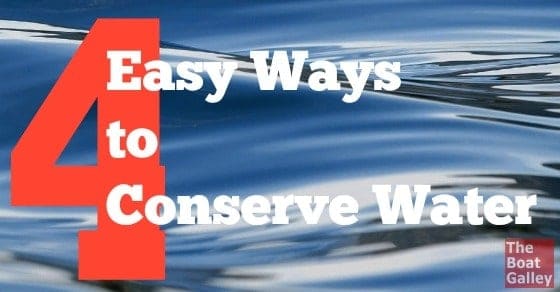 Even if they have a watermaker, most cruisers find they need to conserve water.  Here are four easy ways to significantly cut down on the water you use – without sacrificing too much.

1.  Use a Foot Pump. If you have a foot pump, turn off your pressure water except for times when you’re filling a large container.  With pressure water, you waste some every time you turn the water on and off.  And since most foot pumps put out a smaller volume, you don’t use as much when it is “running.”  This is particularly effective for hand washing and tooth brushing.

If you’re thinking of installing one: Our boat had an in-floor Whale Tiptoe pump in the galley and although it pumped well, we never liked it.  When it is not being used, it is supposed to latch down more or less flush with the floor by giving it a quarter-turn.  We found that just the motion of the boat would cause the center “pump” part to pop up unexpectedly, causing a number of stubbed toes.  Despite the fact that it would have saved us water, we decided not to use it for this reason and taped it down with several layers of duct tape – not pretty, but it kept my toes happy!

Several friends have the Whale Cabinet Mount pumps and are very happy with them.  I’ve spent two separate weeks on my friend Jan’s boat Winterlude with one, and think it’s a much better solution.  Available from West Marine:

2.  Use an Aquabot to Rinse Dishes. An Aquabot is a small little pump up sprayer. I’ve found that I use about half the water for dishes with it as compared to when I was using the tap. The squeeze bottle sprayers just never worked well for me — it just took too long to rinse anything and there wasn’t enough pressure to really get the soap off.

3.  Use a Half-Gallon Tank Sprayer. A half-gallon tank sprayer is perfect for all sorts of on-deck chores where we needed fresh water.  We found the pump style much easier to use than the hand-squeeze type.  We also preferred the type with an integrated nozzle rather than a hose and wand, making one-handed operation easy.

We used our sprayer for a variety of chores from washing snorkel gear to wiping salt spray off the windshield and sail bag zippers, as well as cleaning stainless.  We also used it many times when we didn’t want to take a full shower but wanted to quickly rinse the salt water off ourselves – or our dog Paz.

The half gallon size was perfect for us – weighed just over 4 pounds full, held enough for most chores, and didn’t take up a lot of storage space.  In five years of owning one aboard Que Tal, we had to replace our sprayer once, after about 3 years, when the spray nozzle broke off when the tank fell from the coach house roof through the companionway and onto the cabin sole after a pair of jet skis went by.

My recommendation, from Amazon (the one we had, pictured, is no longer available, but this one is very similar and more robust with a metal nozzle:

4.  Use a Sun Shower. Finally, using a Sun Shower instead of a pressure-water shower will substantially reduce the water used by most people.  Initially, we were very skeptical of how well we’d like using a Sun Shower – using a plastic bag for a shower just seemed, well, so Mickey Mouse.  Our boat didn’t have a water heater, the previous owner had left a Sun Shower, and so we figured we’d try it before we installed a hot water heater.

We found the Sun Shower worked perfectly well – while there wasn’t a huge amount of water pressure, there was plenty to rinse shampoo.  Cruising in the tropics, the water definitely was hot enough – sometimes we’d have to cover the bag with a towel and let it cool down some so that we didn’t scald ourselves.  And by being able to see how much we had left, we were able to judge how long we could stand under the shower.

A 4 or 5 gallon Sun Shower (depending on which we could find when we needed a new one) gave each of us a nice shower.  Cruising full-time in the tropics – using it every day with lots of UV exposure – a Sun Shower would last about a year.  After several ill-fated experiments with buying other brands, we’re convinced that the true Sun Showers last the longest.  Place a towel under it if it’s on nonskid, to prevent chafing.

Although they are available at many camping stores, I’ve always found the best prices at Amazon:

We found these conservation measures didn’t detract from our cruising but in fact added to it, by giving us more time and power for things other than filling the water tank!