You are here: Home / Podcasts / Documents to Leave Your Boat in Foreign Countries 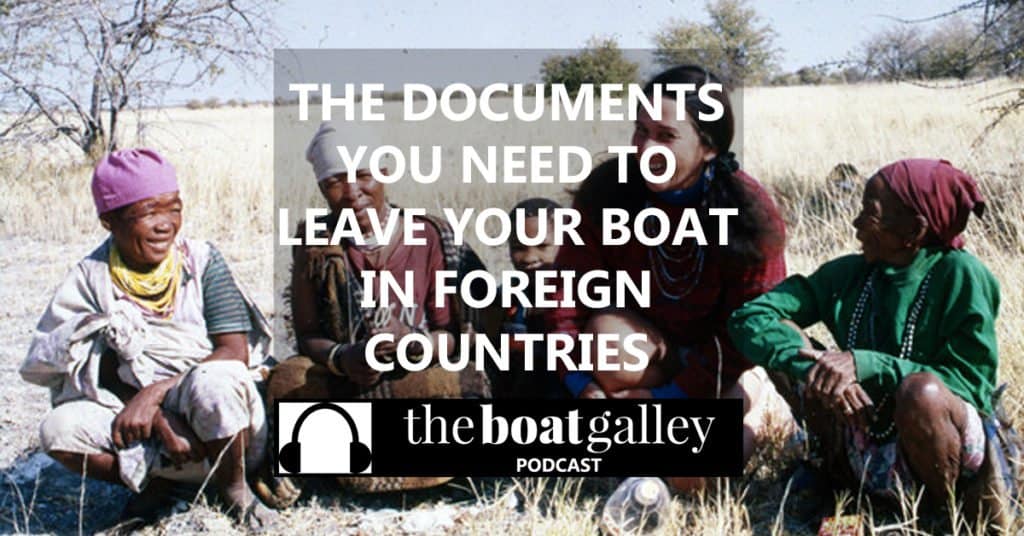 You land in the perfect spot to leave your boat while you explore the interior. But now you’re a tourist, not a sailor. Lin Pardey discusses three vital documents you need for hassle-free travel.

Prefer to Read? Transcript below.

Sponsor:  Infinity, the most trusted name in woven vinyl flooring in the marine industry. Since 2008, Infinity has offered boat owners premier flooring options proven to withstand even the most demanding environments. Each of their products is equipped with UV-stable fade resistance and antimicrobial technology, giving them both durability and style that can’t be matched. Thinking about kicking carpet to the curb? Make the switch to Infinity and see the difference true luxury makes. Use the coupon code “PODCAST” for 50% off samples.

A young cruising sailor contacted me via Facebook. “I know you and Larry live near Auckland, I am stuck here for a few days and would like to buy you a drink.” We were headed into the city for a few days, so we accepted the invitation and had a delightful time.

Andy had purchased an older boat for about $2,000 then spent the next few years living on board and outfitting it. With less than $30,000 invested he and his partner are now two years into a cruise financed by working along the way. Andy was returning from helping deliver a boat from California to Tahiti. (I won’t use the real name as I have not been able to contact him for permission, though I am sure he will be glad I am sharing this with you.) A’s boat and partner were waiting for him in American Samoa. His delivery fee included airfares back to Pago Pago. No flight goes directly from Tahiti to Pago Pago. In fact, no flight goes directly from Auckland to Pago Pago. So, the ticket, purchased by the boat’s owner, was from Tahiti to New Zealand then on to Western Samoa where Andy was to catch a ferry ride to American Samoa.

Unfortunately, when Andy went to board his flight in Auckland, he was refused a boarding pass. The reason? He had no return ticket from Samoa to anywhere else, no way to prove he would not end up stuck in Samoa. This is not an unusual situation. Very few countries will allow you entry without an onward or return airfare ticket, though some will let you fly in if you can prove you have sufficient funds to cover your stay for the length of your visa – a sum that can be arbitrarily set. “I have my boat waiting for me just 75 miles away in Pago Pago. I can’t buy a ferry ticket from Apia to Pago Pago online, have to do it when I get there,” Andy argued. But he could not produce any proof. Larry and I had been forewarned of this potential problem when we first began delivering boats. To avoid being stuck at an airport just out of reach of our boat we created documentation which came in handy several times, not just when we were returning from delivery jobs, but even when we set off on road trips.

The first document we carried was a certified copy of our ship’s papers, in our case, the documentation form. Your ship’s registration papers, or a state license or simply the sales papers you signed when you bought the boat should prove you own a boat. The papers must include the hull or documentation number. The second, and possibly more important paper is proof you have left your boat in the foreign port. The only way to get this is to go to the local customs office, present them a letter stating your boat is legally entered and waiting for your return. Ask them to sign and stamp this paper. Some customs offices have their own forms to serve this purpose, or they may use the clearance forms you filled out on entry.

How many times did we need these papers?  We definitely could not have gotten back to our boat in Brazil, nor five years later to Chile on a one-way airline ticket without them. Nor could we have gotten on board the ferry in southern England, bound for Spain without proof we had someplace to live other than in the tent we carried on the back of our motorcycle. The documents were called upon in Zimbabwe and on re-entry into South Africa when we returned from a safari to Botswana. I can think of half a dozen other times when presenting these documents along with our passports seemed to impress customs officials and make entry fast and pleasant.

Andy felt pretty disappointed when he had to use a sizeable portion of his delivery earnings to purchase a round-trip ticket from New Zealand to Samoa and back. He also asked me to pass on one other hard-learned lesson – check with each airline you will use to confirm how much luggage you can carry. He, like most cruisers, bought some spares for his boat based on the luggage allowance for the first airline he was using. When he arrived in New Zealand he learned the limits were much lower for the flight to Samoa.

One additional document could be important when one of you leaves your boat in a foreign country while your partner stays on board. It could be even more important if one of you became ill and had to be medically evacuated, or in a worst case scenario if one of you died. This is a document called a Limited Durable Power of Attorney.

Rarely does the paperwork attached to a boat give both partners equal ownership of the vessel. Even more important, rarely do both partners sign customs and immigration papers showing each as equal captains. Thus, should something happen to the person who is the designated Captain, their partner (wife, husband or defacto) does not automatically have the right to move the boat or ask for clearance to take the boat to another destination. We learned this the hard way when we were asked to deliver a yacht after the owner had died. His wife could not give us permission to move the boat out of the path of a hurricane that was fast approaching Mexico, even though we had documents from their lawyer (including a copy of the will) assigning the boat to us. (In the end, the local authorities suggested they would turn a blind eye to our departure if we left after dark.)

A sample copy of this is included in the notes for this program.

It is important to have both a notary and another witness sign this; in some American states, two witnesses are required for such documents.

133 Shares
Some links above (including all Amazon links) are affiliate links, meaning that I earn from qualifying purchases. Learn more.