You are here: Home / Living on a Boat / DIY Dog Grooming 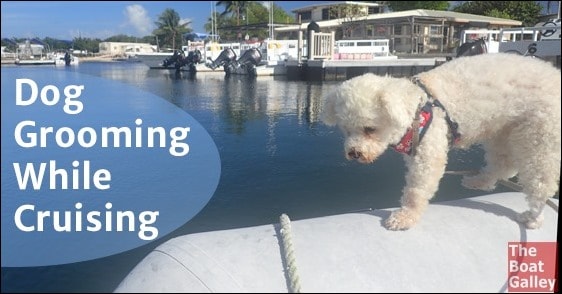 If you have a dog with hair that grows (as opposed to fur that sheds), long-term cruising adds one more skill you need to learn: DIY grooming.

When we’re in a good-sized town, we try to find a groomer – we usually manage to do this two or three times a year. But sometimes, such as now in Marathon, there are few local groomers and there is a 2+ month wait for an appointment if you’re not already on the client list. So we have to do it ourselves. Ditto for times when we’re in remote places. We’re not trying to make her look ready for a dog show, just a practical cut for life as a boat dog.

Paz is an unknown mix, but most likely a combination of poodle, bichon and possibly Maltese. Years ago, I got a set of inexpensive “people” hair clippers and tried to use them on her very thick curly hair. It just didn’t work. So I used a pair of 4” scissors for several years . . . it worked, but it took forever and, I’ll admit, it looked like a hack job. A slicker brush, recommended by our Mexican vet, was used on the tangles – and if she got a bad one, I’d just cut it out (which contributed to the hack job appearance).

Since then, various professional groomers and other cruisers with “poodle-y” dogs have taught me about a number of tools to make grooming much easier. Paz looks better, too.

First off, if you are actively cruising in more remote areas and taking the dog ashore on beaches, paths and so on, the grooming challenge is going to be tougher than when living in a house and walking on sidewalks. Paz picks up dirt and sand, every imaginable kind of burr, sticker and thorn . . . not to mention her penchant for rolling in sand and mud and wading in salt water. Burrs and mats occur on a daily basis.

So before discussing the grooming tools I use, a few things I’ve learned in general:

Admittedly, these things may not be totally in line with the typical grooming for your breed of dog, but it will make it much easier on your dog and yourself.

For everyday brushing, I’ve found four tools that work much better than the old slicker brush (I use all four and got them from Amazon):

Whether for cutting mats out or trimming around eyes and mouth, a pair of scissors is essential. I much prefer to use small, rounded tip (aka blunt tip) scissors with a sharp blade. To me, blunt tips are just a whole lot safer when working around a dog that moves!

These Fiskars scissors aren’t expensive, but I label them with a Sharpie as being for Paz only – using them on other things will dull the blades (we keep a second pair in a different color as utility scissors). I got mine at Walmart; tons of places sell them or you can get them on Amazon (note: they are right-handed and officially “kids” scissors but my fingertips fit and the blades are quite sharp):

Good clippers make a huge difference! First off, you’ll need sufficient battery capacity and an inverter to run the clippers (a generator would also work or maybe you could find power ashore). Clippers do NOT require a pure sine wave inverter (but it’s fine to use one).

“People” hair clippers simply won’t go through most dogs’ hair. And dog clippers aren’t cheap by the time you get a couple of blades and lubricant. But getting good ones will pay off in the long run, both in making hair cuts easier on you and the dog and in dollars saved when you’re in the land of $50 or more dog grooming!

IMPORTANT: Cut your dog’s hair when it’s CLEAN and DRY. I usually give her a bath late one day (I used Johnson’s Baby Shampoo so it doesn’t sting her eyes) and then clip her the next day. DO NOT use the clippers if salt water has dried on the hair – it will be a sticky mess! Even just a bunch of dirt will clog clipper blades. And never use electric clippers on a wet dog.

Below, I’ve listed the clippers and blades that we use on Paz. You might want to check with your current groomer to see what blade lengths they use on your dog now – but my advice is to get one fairly short blade for those “close trim” areas I mentioned above (the Andis clipper comes with one). I got all the items below from Amazon:

I use an old toothbrush to clean hair out of the blades after every haircut. The Andis owners manual shows you how to do this – it’s easy and you don’t need to buy a special brush.

We don’t use any sort of tether or “head and haunch holder” – in inexperienced hands (mine!) they seem too much like a noose if the boat were to rolls and Paz slide. Instead, I use one hand with the clippers and one hand under her tummy or wherever works best; sometimes Dave helps a bit with steadying her. Sometimes if Paz just gets too fed up with sitting/standing still for the trimming, we stop for the day and finish up at another time. In general, though, she’s very good about it!

Paz is much happier about the haircut if she has a secure place to sit or stand. We do it in the cockpit to make clean up easier. I’ve learned to put one of my non-slip kitchen mats or an old towel down for her to stand or lie on – this made a huge difference in how antsy (or not!) she gets. Feeling steady on her feet has made it MUCH easier for both of us. (Note these are the same mats I bought for drying dishes – I love dual purpose items):

By the way — have a good brush and dust pan and/or hand vacuum cleaner to clean up when the cut is done!

If you don’t already have them, you’ll also need nail clippers (check with your current groomer as to what works best on your dog’s nails; we use an old guillotine-style pair) and doggie toothpaste (Paz is too small to use a toothbrush, I rub the toothpaste on with my finger).

I’ve said it before, but I’ll repeat it here: using a harness instead of a collar is much safer sboard a boat. We hook Paz’s leash on her harness whenever we’re underway (with the other end attached to a cleat or other secure place). With a harness, if the boat rolls and she slides, the force is spread over her chest; with a collar it could break her neck.

614 Shares
Some links above (including all Amazon links) are affiliate links, meaning that I earn from qualifying purchases. Learn more.