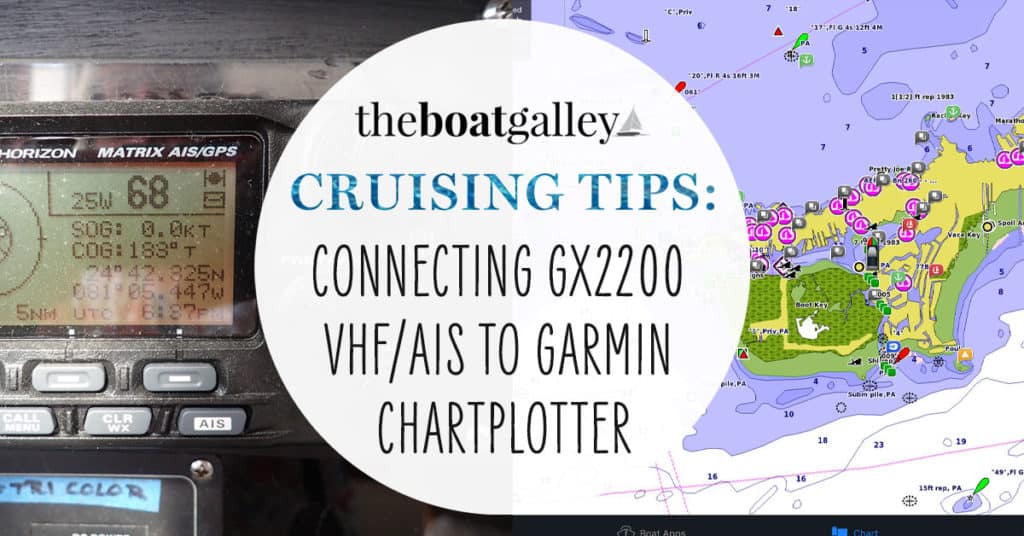 Over the past week, we installed a Standard Horizon GX2200 VHF with AIS receiver and hooked it up to show AIS targets on our Garmin 541s chartplotter.

The GX2200 is a DSC-capable VHF with an internal GPS antenna (this makes DSC distress calls automatically include the GPS position – an important feature in and of itself) and also AIS receiver. If you install it in a location that blocks the internal GPS, it can also use an external GPS antenna or GPS position information from the chartplotter. Like most Standard Horizon models, you can also add a remote microphone at a second location (generally the helm).

I’ve had questions about how to do this, so here it is. From the little bit of looking at the owners manuals for other models of Garmin chartplotters, many will be the same or very similar but if you have any questions you will have to call the Garmin tech support and/or Standard Horizon tech support (SH seems to have info on connecting to many chartplotter models).

Make Sure AIS Works on the Radio

If you are connecting a remote microphone (RAM) you can do it now or later. The big thing is to know that the radio is receiving AIS signals before proceeding. There aren’t any settings or anything to change on the radio for this but if you’re not getting AIS hits on the radio, you won’t be able to get them on the chartplotter!

There are three steps to connect the VHF to the chartplotter for AIS/DSC display:

We are using the internal GPS for the radio, so I did not have to hook up an external GPS. However, the basic principles are the same for that wiring. For those wires, however, the chartplotter (or external antenna) will be the transmitter and the radio the receiver. Just as with the AIS/DSC wires, you are likely to have to change settings on both the radio (if using its output) and chartplotter.

The easiest way to do the wiring — and the way I did it — is to use one wire for both AIS and DSC, instead of separate wires. Now, I say “one wire” but really it is a wire pair — one being positive and one negative. [NOTE: You can separate the AIS and DSC and use a pair of wires for each — according to Standard Horizon there is no advantage to doing so and means that you have to run twice as much wire.]

The important thing to know is that Garmin uses the power ground wire (yeah, the black wire of the red-and-black power wires) as the NMEA 0183 ground as well.

Turn off the power to the chartplotter and VHF before doing any wiring.

So here’s the wiring to do it as I did:

Three of these wires — the gray and brown from the VHF and the brown or violet from the chartplotter — are really thin. To make good connections, I strip 1/2″ (instead of the normal 1/4″) off these and then fold the bare wire over on itself before putting the connector on and crimping it. I use shrink tubing over all connectors.

NOTE: Since the VHF and chartplotter are about 5 feet apart as the crow flies but 20-ish as the wire snakes, I got some 20/2 boat instrument wire to run between the two. It’s a red/black pair, which makes it easy to keep the pos/neg connections straight. So, from the VHF to the chartplotter it was actually gray-red-violet (I used Port 2) and brown-black-black.

When combining the DSC and AIS signals using the gray and brown wires only, you have to tell the radio to use 38400 baud on these wires (AIS data needs the higher baud rate; DSC doesn’t care). If you don’t do this, the VHF will only transmit DSC data to the chartplotter.

Directions for doing this are on page 94 of the GX2200 manual, but basically:

There are four settings that you must change or confirm on the Garmin chartplotter. On most models, they can all be found under Home/Configure (check the owners manual for your chartplotter as to exactly where these are and how to access):

Check on the radio that there is a boat within range that is transmitting an AIS signal. You may need to increase the AIS range. Note approximately where the boat is.

Then bring up a chart of the area on the chartplotter. Adjust range as necessary so that it includes where the transmitting boat is.

You should see it on the chartplotter. On ours, boats that are not a threat are shown as green triangle outlines. Boats that are a potential danger appear as a solid red triangle with their direction of travel shown as a line. Boat names are shown for both (when you first turn the radio on, it can take several minutes for names to appear in place of MMSI numbers).

On ours — admittedly an older unit with a smaller screen — information about the vessel appears on a separate screen. I move the cursor with the 4-way rocker to the vessel and then press select.

If we need to call one of the vessels, it’s easiest to just do it from the AIS screen on the radio — go to the list, select the boat and press call. This is all shown on the RAM mic that we have at the helm.

The GPS Store has had some good deals on the radio and they have excellent customer service — that’s where we bought ours. You can also buy them at most other chandeleries.

759 Shares
Some links in this article (including all Amazon links) are affiliate links, meaning that we earn from qualifying purchases.