You are here: Home / Food & Cooking / Cleaning the Stove Burners

One of our first tasks aboard Barefoot Gal was to find and fix the propane leak on the stove that we’d discovered during the survey. We knew the leak was right in the vicinity of the left burner as there wasn’t a leak when using the right burner.

Dave figured it’d be a relatively simple job (simple by boat standards, that is) of removing the stove top so that he could get to the gas connections to tighten them (or possibly replace a line). It ended up taking the better part of three days.

We think that the problem was originally caused by the same thing that created at least half the work in the repair: something on the stove (baked beans, maybe?) that had boiled over or been spilled and totally covered the propane burner. This, in turn, hadn’t been cleaned (more on the likely reason below) and, we think, clogged up the gas orifice and perhaps the resulting back pressure created a leak in a connection.

The stove is a Voyager 2000 and we (well, Dave) ended up taking it almost totally apart to clean it and tighten up the propane connections.

And while you probably have a different make stove on your boat, the lessons we learned are equally applicable on other stoves.

First, the burner caps were held in place with tiny set screws in the side. This created a big problem for Dave in trying to clean the burner (how to get the cap off?) and was probably the reason that the original spill wasn’t cleaned up. Even when the burner was cleaned up, they were almost impossible to see. And getting enough of the spilled whatever out to get our smallest Allen wrench in the head took several hours.

Since every other boat stove I’ve ever used didn’t have “secured” caps on the burners, we decided to leave the set screws out after cleaning everything up. That way, when I spill something (not an “if” but a when) it’ll be easy for me to lift the cap off and clean it all up.

Dave finally had to totally remove the stove from the galley so that he could better see and reach to work on it, then had to take the stove top off to clean and resecure the burners and tighten fittings on the under side.

The details of all that aren’t important. The episode just ties in to two topics that I frequently talk about, however: cleanability and taking care of problems as they arise.

Cleanability: the stove was poorly designed with those set screws in the burner cap. To clean any spills, you simply have to be able to remove the burner cap both to clean out all the little holes in it, and to clean anything that spilled inside. Once something was spilled, necessitating the removal of the set screws, they were impossible to find. Catch-22! We improved the cleanability greatly by simply not reinstalling the set screws.

Not ignoring a problem: Yes, figuring out how to remove the burner cap was a pain. But it was obvious that there was a problem and that it had to be removed to clean it. Simply ignoring it (the stove top was wiped up, but I found lots of the same gunk down the sides of the stove and the wall beside it) only made the problem worse. We can’t be sure, but we think that all that hardened gunk may have actually caused the propane leak by stopping the flow of propane in the normal manner and causing it to leak at a nearby connection. And a propane leak isn’t a minor problem – it could cause an explosion. YIKES!

The combination of problems meant that we tackled the problem, it took the better part of three days to fix. And four trips to the hardware store, 14 miles away (but the Cub Scouts did have a great hot dog fund raiser at the store last Saturday). You can bet I’ll clean up any spills as they happen . . . 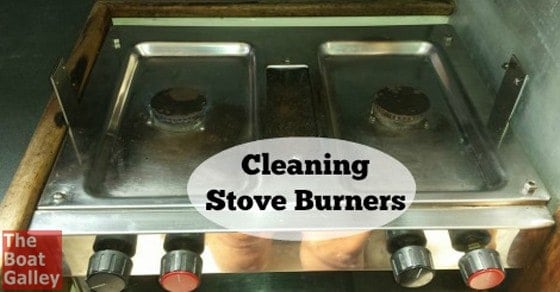 72 Shares
Some links above (including all Amazon links) are affiliate links, meaning that I earn from qualifying purchases. Learn more.