You are here: Home / Cruising & Chartering / Boat Hair: To Cut or Not to Cut?

So, what’s the best hair style for boat life?

What a question! But hey, I’ll give my thoughts . . . add yours in the comments. For me, the two big goals are (a) to be cool and (b) not to have hair in my eyes when I’m outside, snorkeling or doing boat chores.

I’ve had short, I’ve had long, and I’ve had in-between.

In-between is awful. It’s that length where it’s too short to put into a ponytail, but long enough that even a whiff of a breeze will blow it straight into your eyes. Equally awful are cuts billed as “long” but actually layered . . . with some layers too short to go into that ponytail.

To me, “long” is any length that can be pulled into a ponytail (with or without bangs) and short is any cut where none of it can get into your eyes. So which is better? It’s really personal preference. Having had both, though, I can say what I think the pros and cons of both are:

I had short hair when we began cruising and grew it out after about a year (I did most of the growing out while we were based at a marina for the winter). I simply got sick of finding someone to cut it and getting a different cut every time — it got so it was nowhere near the style I wanted. But, I’ll admit, it was incredibly easy!

Dave also has long hair — but it’s very curly. Two products that he’s discovered in the past year that have made it so much easier to deal with on the boat. The two together took his 20-minute combing ritual and made it less than a minute.

My hair is pretty straight and I don’t need either of the above. But I often like to clip my hair up instead of putting it in a pony tail, and I’ve found this clip to work a lot better than the straight ones or banana clips (both of which tend to fall out of my hair easily, especially if there’s any breeze).

And finally, you need a good vacuum or brush/broom to keep hair out of the bilge and then clogging the bilge pump. 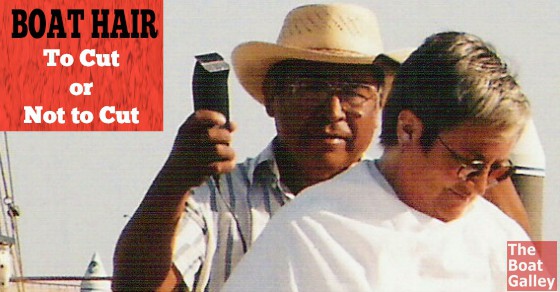 234 Shares
Some links above (including all Amazon links) are affiliate links, meaning that I earn from qualifying purchases. Learn more.