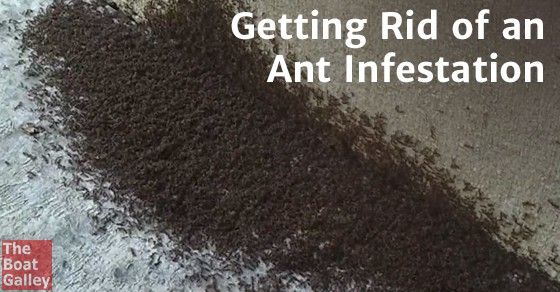 This past summer, we got an ant infestation. I don’t mean we had “some” ants. I mean thousands. It is horrible to open up a seldom-used compartment and find a solid layer of ants.

I was totally shocked. Sure, like any boat, we’d occasionally see an ant aboard. We routinely had ant traps in half a dozen places aboard, and I always sprayed a bit of ant and roach spray in a trash bag when I started it. I kept cloves in sugar. We wipe crumbs off the counter. I mean, I really do the ant prevention stuff I’ve written about.

Somehow, the ants had gotten past all that. The additional traps and spray that I was able to buy in the Bahamas may have kept the infestation from getting worse, but didn’t really make a dent in the number of ants we saw.

I planned to get Terra Bait – the best stuff I knew of –  as soon as we got back to the US (couldn’t find it in any of the stores we went to; I also couldn’t find boric acid). I don’t really like using the Terra traps on a boat because it contains a liquid that can spill and so I didn’t have any with me. Then just before we got back to the US, a reader happened to leave me a note on Facebook about a gel-type ant bait from Maggie’s Farm with the same active ingredient as Terra. The gel won’t spill – perfect for a boat!

No one in Marathon had Maggie’s Farm Ant Baits, so I ordered them from Amazon. And you know how Amazon always has those “you may also be interested in . . . “ products? Well, they showed me Advion Ant Gel Bait Syringes. Friends had great luck with the Advion Cockroach Gel Bait Syringes ending an invasion that had eluded everything else (read Windtraveler’s story here), so I bought a package.

The packages on both said that you were likely to see more ants when you first put the bait out as both attracted ants to get them to take the poison back to the nest. But then as they took it back to the nest and ants died, you’d see fewer and fewer over the course of a couple weeks. The important thing, I learned from further research, was not to let up after a week or two – more ants will be born over the next several weeks. You have to keep the bait out to keep killing them.

I put 4 packages – 24(!) bait stations – of Maggie’s Farm Ant Traps out, some on counters but mostly in lockers. And I used the Advion syringes to put tiny little drops in every crack and crevice I could get to on the boat (the package explains how big and how far apart to put them). We knew where the ant trails were and made sure we had plenty of drops in their vicinity; at the same time, I was careful NOT to put any where dog Paz could get to it. I was also careful not to put any on food prep surfaces or where it could possibly drop into a galley counter.

Four or five days later, we noticed a huge reduction in the number of ants we saw. Live ants, that is. Suddenly I was seeing a lot of black dust on every flat surface. Then it hit me: the “black dust” that I kept vacuuming up was actually dead ants. YAY!!

It’s been over 4 weeks since we did the combination of the Maggie’s Farm Ant Baits and the Advion Gel – and I replenished the gel about a week ago to make sure we’d kill any new generations. We still see an occasional ant, but never a trail and never a swarm around a dropped bit of food or dog treat. It’s been several days since I found any “black dust.” Now that I think about it, I don’t think I’ve seen any ants in the last day or two.

The Maggie’s Farm bait is borax-based (similar to Terra), while Advion uses a different active ingredient. One of my concerns with Advion was whether I had to use a full syringe at a time or could it be re-capped and saved. Yes, they are resealable and can easily be saved (no refrigeration or anything). The gel is good for two years.

I don’t know if one was more effective than the other, or if it was having two types out that was the secret.

I’m now carrying extra of both types of bait (I’ll leave the Maggie’s Farm stations out all the time — although only six at a time — and if I ever start seeing more ants, I’ll immediately put out the Advion), and also got some of the Advion cockroach bait stations and gel, should we ever have a problem with roaches. I can’t personally vouch for the cockroach bait, but both types of  ant bait are highly recommended:

823 Shares
Some links above (including all Amazon links) are affiliate links, meaning that I earn from qualifying purchases. Learn more.