You are here: Home / Boat Work / A Better Propane Regulator 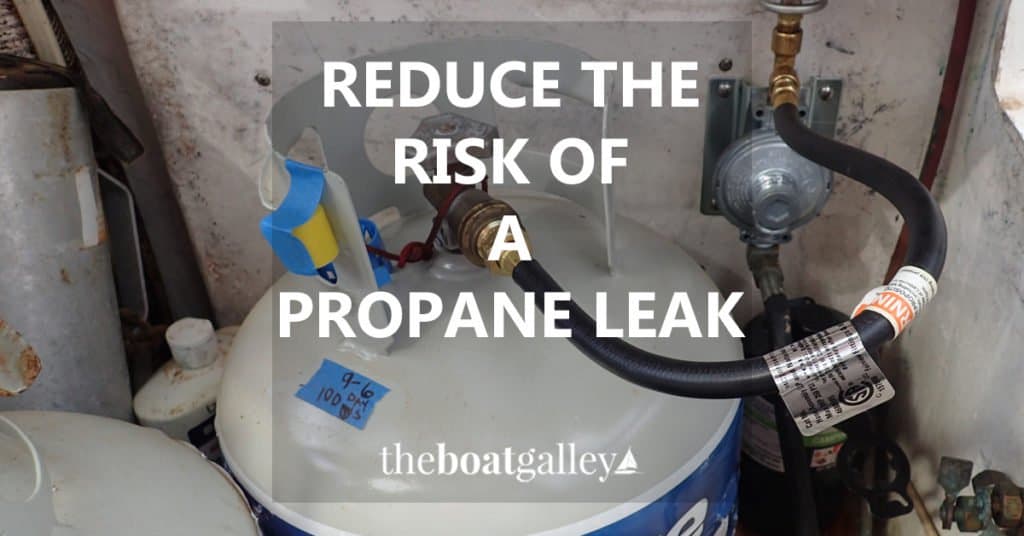 In four years of owning Barefoot Gal, we’ve had a leaky propane tank three times. The first time, we assumed it was a bad fitting on the tank. The second time was when we came back to the boat after Irma and turned the propane back on. Okay, understandable after a Category 4 hurricane. And the third time, just recently. THAT caused us to look at what was happening a little more closely.

Each time, the leak was between the tank and the solenoid, but at a different place each time. Our propane locker is vented directly overboard, and we started turning off the tank each time, so it wasn’t a huge safety risk. Dave had been able to use soapy water, find the leak, take everything apart each time and re-connect the regulator and gauge and stop the leak, but the bottom line was that it shouldn’t leak.

Here’s a picture of the old regulator and gauge assembly we had:

The gauge and regulator extended nearly eight inches off the tank. While the regulator isn’t actually heavy, this assembly does make for a long lever arm with the weight of the regulator at the end. As the boat moves under sail or in waves, the assembly would bounce and eventually one of the joints would open up just a bit.

We needed a way to stop that.

There’s no good way to secure that “arm” in the propane locker. Our previous boat had sort of a ledge that the far end of the regulator rested on, and the locker was much smaller and fit the propane tank much more tightly, so it couldn’t move as much.

Here, after looking at different possible solutions, we opted for a new, bulkhead-mounted regulator with a gauge right on it. Now, a hose comes off the tank and all that heavy stuff is right on the back wall of the locker.

The tank gauge is a little harder to see there, but I’ll take that over having a leak.

As boat projects go, this one was pretty simple, taking about two hours, part of which included having to empty the locker on the other side of the mounting location. The biggest chunk of time was actually figuring out exactly where in the propane locker to put it.

Be sure to use sealant on the mounting bolts — while any leaking propane should flow to the bottom of the locker and out the vent, in bouncy conditions it can “splash” around and you don’t want any going into a locker without the “low point-directly overboard ventilation” required for propane.

The bulkhead mount propane regulator is made by Trident Marine and comes in two models. The only difference is how the hose connects to the propane tank (male or female; most tanks can use either style, having threads on both the inside and outside of the connection point) . Both are available on Amazon as well as from other marine chandleries.

The unexpected bonus? I never thought there was a problem with the old regulator, but my stove burners all burn hotter and more evenly since we changed!

364 Shares
Some links above (including all Amazon links) are affiliate links, meaning that I earn from qualifying purchases. Learn more.