I’ll bet you have certain ways of doing things. And when someone else does something differently, it seems wrong to you.

Do you say something to the other person, or not?

If a different way doesn’t create a safety issue, who am I to say it’s wrong?

Yes, I may think my way is easier or better. But “correcting” someone too many times leads to hurt feelings and no fun. “I’ll never learn this!” gets yelled; stress levels skyrocket. And things go further downhill.

Dave and I both began sailing in our teens, long before we knew each other. And we are both pretty mechanical, but with very different ways of analyzing problems. We do many things very differently. And neither one of us really wants the other one giving “suggestions” . . . unless we ask.

Most of the time, neither one of us is “right” and the other “wrong” but we have been known to wonder just exactly what the other was doing. His go-to screwdriver is different than mine. He prefers a different nozzle on the vacuum. And so on.

It comes down to a simple question: is the other person just doing it differently, but getting the same result? Simply taking more time to figure things out for themselves isn’t a reason, in and of itself, to take over.

In fact, I’d even argue that doing things differently can be an asset. More than once, one of us has noticed a problem — or potential problem — that the other one hadn’t, simply because we did something a little differently. And sometimes, the other person discovers an easier way to do something.

Admittedly, sometimes it is important that “everyone” do something the same way, generally for safety reasons. Say cleating off a dock line, so that someone else can quickly uncleat it in the dark if there is an emergency. Or putting the engine key in a particular place so it’s quick to grab if needed. It’s not really that one way is better, but rather that everyone has to agree to do it the same way.

Other times, a different way of doing something may result in gear breakage or put someone in danger of an injury. Then they’re not getting the same result and discussion is in order.

All that said, I’m far from perfect. Dave would tell you I give unsolicited advice far too often (I might say the same about him . . .). I try to remember that it’s the result that’s important and not how we get there. And keeping the stress level down is more enjoyable for everyone.

And while I think of “6 + 1 = 3 + 4” primarily as Dave and I interact with each other on our boat, it applies more broadly to cruising in general, too. There’s no one “right” boat or even a right size. I have friends cruising on 28-footers and others on 60-footers. Some are sailboats, some power. Same may cruise a week at a time, others a month and still others full time. Everyone has a different budget. Yet we all end up in the same harbor, sharing friendship, help and support. It doesn’t matter how we got there, just that we did. 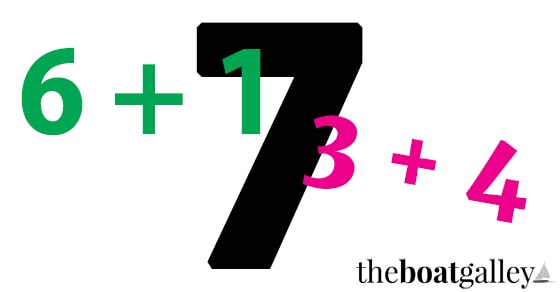 59 Shares
Some links above (including all Amazon links) are affiliate links, meaning that I earn from qualifying purchases. Learn more.