You are here: Home / Other / Using Different Yeast Types 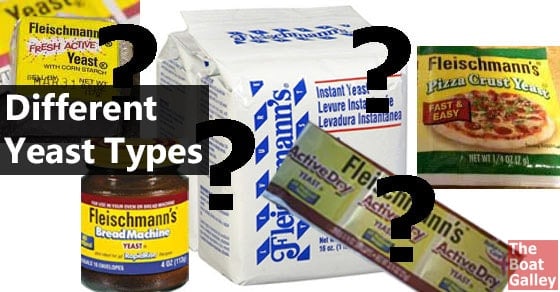 Do you really need to buy different types for different recipes?  What are the differences?  Can you substitute one for another type of yeast?

Well, there are differences.  But you really don’t need to keep a bunch of different types on hand, and it’s not that difficult to substitute one type for another — if you keep a few simple things in mind.

The primary difference in yeasts is whether they have to be first mixed with water and proofed, or if they can be added directly to dry ingredients.  Some types are designed to rise more rapidly and/or have various dough conditioners mixed in, which make them somewhat more suited for one type of dough than another.

While some types of yeast have been developed to be able to be mixed into the dry ingredients, the important thing is that (at least as far as I know) there are NO types that are hurt by first proofing them.

I always proof the yeast first in water to make sure that it’s good.  I never want to waste ingredients by mixing an entire recipe then discovering that it won’t rise, but it’s especially important on a boat where yeast storage may not be ideal and where it can be a while before I get more flour — particularly specialty flours.

So the simple answer is that if you use a recipe that calls for proofing the yeast, or first dissolving it in water, it just doesn’t matter what type of yeast you use.  And if the recipe calls for mixing yeast with the dry ingredients, but you don’t have the right type of yeast for that, you can substitute the type that you do have by first dissolving it in water and then adding the yeast and water mixture to the dry ingredients.

The only thing to note is that this technique does not work well with many bread machines because of how they are designed to mix the dough — if you are using a bread machine, using yeast designed for a bread machine will provide better and more consistent results — but you’ll get an acceptable loaf using Active Dry yeast.  Also, it’s fine to use “bread machine” yeast when making bread by hand, and it’s fine to proof it in water when not using the bread machine, even though the instructions on the jar say to add it to the dry ingredients.

To proof yeast, begin with a small bowl and the specified amount of warm water.  The water should be comfortably warm to the touch, not hot — if it’s too hot, it will kill the yeast.  Add the yeast, sugar (use real sugar, honey or molasses, not a no-calorie substitute — yeast needs the real thing to live and grow), salt and about 1/4 cup of flour.  Stir until the yeast is dissolved.  Set aside for 10 minutes in a warm place.  It should get very bubbly, as shown in the photo.  If it does not, the yeast is no good.  Get new yeast and try again — continuing with bad yeast will just waste flour.

Types of Yeast and Usage Notes

Cake yeast: Very few people have seen cake yeast, also called fresh yeast or compressed yeast.  “Cake” means that it comes in a cake as in the photo, not that it’s used for making cakes.  It’s sold refrigerated and only lasts about 2 weeks, even when kept in the refrigerator.  One small cake is equivalent to a packet, or 2-1/4 teaspoons of bulk yeast.

Cake yeast is usually used in commercial bakeries, where it comes in large cakes.

Cake yeast MUST be dissolved in water before adding to the dry ingredients.  Be sure to proof it due to its short life!

Active dry yeast must be dissolved in water before using but can be used in any recipe; it’s best to not just mix it with warm water but to actually proof it so that you know it’s good.

These are all names for the same thing, which is most often sold in jars in the US, although you may find it in packets or even in foil-covered bricks.

It’s a different yeast strain than active yeast, and Rapid Rise yeast and Bread Machine yeast often have a tiny bit of dough conditioner added. The yeast granules are a little smaller than the Active Dry yeast granules if compared side-by-side.

Rapid Rise or Bread Machine yeast can be substituted for regular yeast and you can dissolve it in water if that what your recipe calls for.

According to the manufacturers, if you dissolve the instant yeast in water first, you’ll have to let the dough rise twice before shaping it.  While that does produce the best results, I’ll go on record as saying that when I’m in a hurry, I’ll only let the dough rise once . . . no matter what type of yeast I’ve used!  And the results are still pretty good.

As I noted above, you can use “Bread Machine” yeast when making bread by hand with no problem — I often do this, as bread machine yeast is much cheaper per loaf where I live than the individual packets of regular yeast.

For years, people have made pizza from whatever yeast they had on hand.  Recently, however, Fleischmann’s came out with “Pizza Crust Yeast.”  It’s got dough conditioners so that the dough is less likely to tear as you stretch it out, and the doesn’t need to rise even once before shaping.  It does simplify making a pizza, but don’t feel that you can’t make a pizza from scratch without it.

You can substitute Pizza Yeast for any other type of yeast in any recipe. It can be mixed in with the flour or dissolved in water first. It doesn’t matter.

There are differences in the various yeasts, to be sure.  But when storage space is tight — as it is on a boat — there’s no reason to try to keep more than one type of yeast.  Assuming you’re not using a breadmaker as they are generally impractical on a boat, if you get in the habit of always proofing your yeast it won’t matter what type of yeast you use.  I’ve found that any recipe that doesn’t call for proofing yeast can be made just as well if you do proof it — just follow the technique described in Yeast Bread Making 101 but with the ingredients in the recipe of your choice.

And no matter what type of yeast you use, be sure to store it properly in a cool place.

434 Shares
Some links above (including all Amazon links) are affiliate links, meaning that I earn from qualifying purchases. Learn more.