You are here: Home / Other / Where To Store Our Non-Boat Stuff?

Ever since we decided to sell the house and live on the boat full-time, we’ve been kicking around what seems like a pretty simple question: where should we store the stuff that we’re keeping, but not putting on the boat?

There’s all our scrapbooks and travel memorabilia, a few sentimental items that have been handed down in our families but wouldn’t do well on the boat, our camping gear and some cold weather clothing. Most of our “stuff” we’ve either gotten rid of or given to kids or family . . . much when we went cruising in 2002, and still more as we moved out of our house two weeks ago.

When we went cruising before, we left our stuff in a self-storage unit in the central Illinois town where we’d been living. It was a nice storage facility, they were willing to bill our credit card monthly (and send an email if the card expired to ask us for the new card info) and the rates were certainly good.

The problem, we discovered, is that the storage unit wasn’t near where we typically came when we returned to the US and wanted things in it. While we thought of the area as “home,” the reality was that we visited family on trips back to the US. And they were all 700 to 1,000 miles away.

So this time around, we decided to think about the issue of where.

We temporarily stored stuff in a facility near our former house while we were readying the house for sale. But do we want to leave it all there? Based on our past experience, we said no.

Our initial thought was that we’d pile everything we were keeping into a trailer and take it to Florida and store it there.

But then we started looking into storage in Florida. Reading various online articles and blogs plus talking to friends there convinced us that if we store anything in Florida, we need to put it in climate-controlled storage so that our “stuff” isn’t ruined by humidity, mold and mildew. Climate-controlled (air conditioned to about 80 degrees in Florida) storage costs considerably more than non-climate-controlled.

We also learned that if we aren’t storing a huge quantity, getting an inside unit (off a hallway, not with a rollup door fronting the driveway) is best so that there is less chance of water intrusion in the event of a tropical storm or hurricane.

Storage in Florida in general is more expensive than in a small farm town in central Illinois (no surprise there!). And in Illinois, climate controlled storage wouldn’t be necessary: all we’d have to do is put pallets on the floor to avoid any dampness from condensation on the concrete floor.

So we re-thought our plan. Our camping gear and some winter clothes would easily fit into a small (5×5) climate-controlled storage unit in Florida . . . along with some things that we use only when the boat is hauled out, such as a pressure washer. This stuff, together with our suitcases, tools and other stuff we took off the boat with us when we expected to be gone for the whole summer, would also easily fit into a small trailer that we could tow.

We could leave all the stuff that we’d only want when we might move back ashorein a small storage unit in Illinois. Since we have no idea where we might ever settle on land again (if we ever do), it really doesn’t matter where we store it. Making one trip to Illinois from wherever in order to get it wouldn’t be that hard.

So, the stuff that we are likely to want to use while we are living aboard and cruising will be in southern Florida, and everything else will stay in Illinois. We think this will be much better than leaving everything in Illinois! 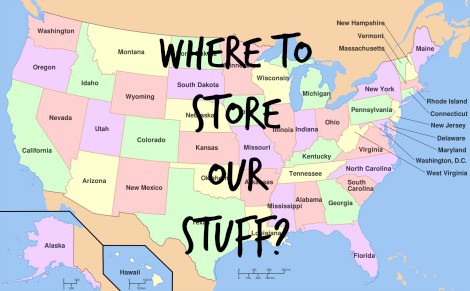 97 Shares
Some links above (including all Amazon links) are affiliate links, meaning that I earn from qualifying purchases. Learn more.