You are here: Home / Other / What Happened to Our Baby Steps?

So, last summer I wrote about our tentative plans for this winter. A big part of what I wrote was about taking baby steps – adding one layer of complexity at a time until we were comfortable with how things were going, then adding another and so on. At the time, our plan was to spend just a couple of weeks in the boat yard, then go to Ft. Myers for a month or so at a marina, then maybe some time on a mooring there, and then finally head down to the Keys.

We didn’t do that. We ended up spending over two months in the boat yard, re-doing the bottom. It started getting cold, and marinas in Ft. Myers were filling up for Christmas. All our friends were heading to the Keys . . . and a great weather window opened just as we left the boat yard.

So off we went.

On one hand, we’d been living aboard the boat for two months, so we knew how most of the “living” systems worked – that had been one of things we thought we’d want time at the marina for. But we didn’t have much experience with the boat underway. We had originally thought we’d use the time at the marina to do some daysails and so on, but once we looked more closely at the charts, we realized that wasn’t really going to happen as it was about 20 miles from the Ft. Myers marinas to water that wasn’t just a channel. The only way to start getting that experience was just to go (am I rationalizing here?).

Would we have been better off if we’d spent more time in Ft. Myers? I doubt it. We would have been connected to shore power, so probably would not have discovered the battery problem. And we wouldn’t have discovered the fuel or engine problems, as we wouldn’t have been using the engine (note: so far, it does NOT seem that the problems are related – when we got to the limit of our troubleshooting ability, we brought in a highly recommended diesel mechanic. His testing says it’s a serious compression problem that may require a complete teardown or warranty work, so he has referred us to another mechanic.)

In our favor when leaving Ft. Myers:

Actually, it was these preparations that stood us in good stead – particularly the weather window, sailing knowledge, and food/water stock, not to mention not expecting things to go perfectly smoothly. And while we didn’t exactly follow our “baby steps” plan, we definitely did a big shake down. We fixed a number of things along the way – particularly running rigging for the sails – and have a page-long list of things to fix, replace or buy spares for.

So, we were wrong to change our plan? Overall, I think that we were better off leaving with less time spent aboard and a huge weather window than waiting to have more time aboard getting to know the boat and getting an iffier weather window (winter northers can build up nasty waves in the shallow waters here; we wanted to avoid them at all costs). 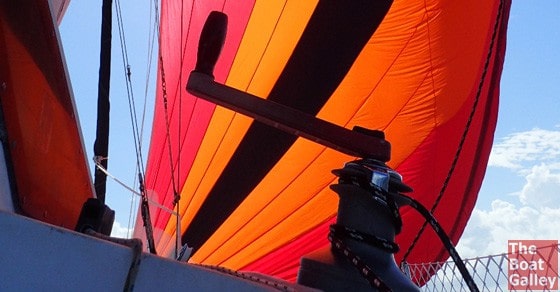 103 Shares
Some links above (including all Amazon links) are affiliate links, meaning that I earn from qualifying purchases. Learn more.