You are here: Home / Other / Tenderizing Beef 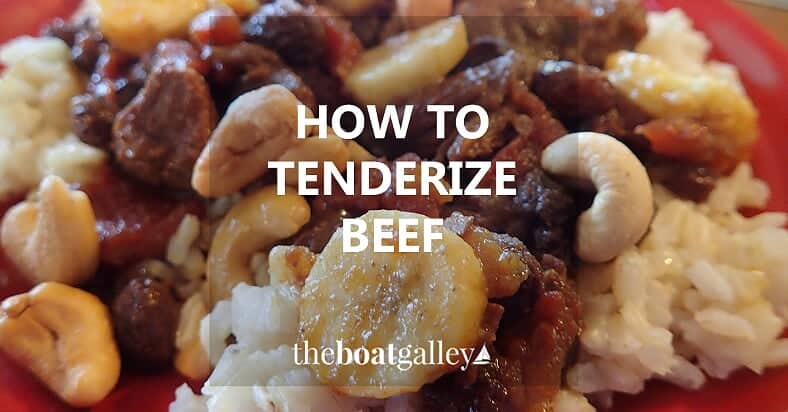 In most other countries, beef doesn’t have as high a fat content as in the US.  That’s great news for your health, but not so great for tenderness, as fat is part of what makes beef tender.

The other factor is the inherent toughness of the muscle fiber in a particular cut.  And there are a number of ways that you can make that fiber more tender.

In all these methods, however, the bottom line is that you can’t make a cut into something it’s not.  No amount of tenderizing will turn a chuck steak into a rib eye—it will simply make it a more tender chuck steak.

The best way of tenderizing a tough cut of beef is simply to choose the correct cooking method:  long, slow, and moist.  That’s why the tough cuts are used for pot roasts, stew and Swiss steak.  Cooking the meat over low heat for 3 or 4 hours in a liquid will make almost any cut tender.  Using a pressure cooker can cut down the time by 50% or more, saving propane and lessening the heat in the boat.

Pounding the meat with a tenderizing mallet is the second-best method, and often combined with long slow cooking.  A tenderizing mallet looks a bit like a hammer with a waffle face (if you’re interested in buying one, the one by OXO Good Grips is a good choice, available at Amazon).  If you don’t have one, a regular hammer will also work.

Place the meat in a Ziploc bag and seal it, getting as much air out as possible (you don’t have to use a bag, but it makes clean up much easier and there is less chance of contamination and food poisoning).  Put it on a sturdy, solid surface and begin pounding.  Be firm, but no, don’t pound as hard as you can.  You’re not trying to flatten the cut.  Thick pieces will take a little more pounding than thin, but generally just go over the meat once, flip it over, and do the same on the other side.

Ever wonder why hamburger is the cheapest beef?  It’s made from all the really tough pieces.  Ground up, they’re perfectly acceptable.  If you have a meat grinder aboard, you can do the same thing.  Otherwise, simply chop, dice and mince the meat finely, throwing away the tough pieces of fibrous tissue you come across.

Any marinade with an acid in it—vinegar, citrus juice, and yogurt are common—will weaken the muscle tissue and tenderize it.  Some marinades are specifically designed to tenderize as well as add flavor, such as my favorite meat marinade, which will tenderize to a certain extent.  The reality, however, is that marinades just don’t do as much good to a really tough cut as pounding and slow cooking will—but you can combine all three and almost any meat will be good.

Pineapple, papaya and kiwi contain chemicals that will also tenderize meat.  Marinades containing any of these can be quite effective, but you have to be careful not to marinate the meat too long or the outside can become mushy.

Many people don’t like to use commercial meat tenderizer, myself included, as it can make the outside of the meat mushy while the center remains tough.

If you want to try it, however, you can find meat tenderizer near the other spices in most supermarkets and simply follow the instructions on the jar.  Outside the US and Canada, meat tenderizer can be hard or impossible to find.

Frankly, the best use for meat tenderizer is to take the pain out of bee stings and many insect bites—just sprinkle it on or make a paste with a little water.  For this reason, you’ll find a jar on many boats!

229 Shares
Some links above (including all Amazon links) are affiliate links, meaning that I earn from qualifying purchases. Learn more.