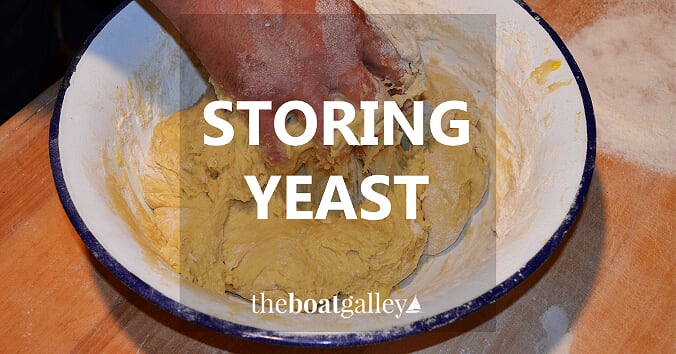 If you’re baking a yeast bread, you want the bread to rise, period.  So how should you store your yeast to make sure that it will? Dead yeast is the primary cause of heavy, dense loaves of bread that just don’t rise.

Moisture, heat and air will, quite literally, kill yeast.  And dead yeast won’t do anything for your bread.  But it’s not hard to store it correctly, for the longest life.

Unopened packages are generally fairly airtight and moisture-proof as they come from the manufacturer.  Thus, they really only need to be kept cool.

If you’re in a cool climate, they can be kept in a cool locker or cupboard. In warmer climates, it’s good to put the yeast in the refrigerator even before it’s opened.  If that’s not possible, find a cool place — perhaps in a waterproof plastic box in the bilge or against the hull and below the waterline.  Watch out for lockers near the engine or oven!

I like to put yeast packages in either a Ziploc (with the air removed) or put several packages in a plastic container with a lid — that way, should a jar or foil package break, the mess is contained.  Further, if it’s a foil package, you can still use the yeast.

Unopened, yeast will last about 2 years from the date of manufacture IF it’s kept cool.  The problem is knowing whether it’s been kept cool throughout the distribution chain — and so I try not to buy it too far ahead of when I’ll need it.

The instant that the yeast package is opened, you suddenly have to think about all three enemies:  not just heat, but air and moisture as well.  If you’re using individual yeast packets, no problem — you’re going to use the whole package.

But what about jars and larger bulk packages — the way that yeast is sold in most other countries?

Rule #1:  Never put a damp spoon into the yeast container.

Whether it’s a measuring spoon, mixing spoon — or even something other than a spoon — the first rule is to never introduce moisture into the yeast.

Keeping the air out isn’t a big problem with a small jar of yeast — just don’t leave it open too long on the counter, and put the lid on tightly when you’re done with it.

But if you have a larger bulk package, you can’t store the yeast in that foil package once it’s been opened.  Instead:

Dividing the yeast will really extend the life of the package, as the bulk of the yeast won’t be exposed to warm, moist air every time you bake.

As with so many things, I like the Lock & Lock storage containers and the Rubbermaid Lock-It’s for storing yeast — both do a good job of providing an airtight, moisture-proof barrier and don’t pop open accidentally.  You’ll need one very small (half cup or less) container and another small-ish container that will hold about two cups for the contents of a typical bulk package.

Once opened, yeast will only last a few weeks in tropical heat; somewhat longer in temperate climates.  Lengthen the time to 4 months by storing it in the refrigerator in an airtight container, or 6 months in the freezer.  At least that’s the official story — I’ve heard of people using yeast that was two to three years old that had been frozen.

However you store it, and no matter how new or old it is, be sure to proof the yeast as described in 5 Tips for Baking Bread (Tip #3) whenever you make bread.

783 Shares
Some links above (including all Amazon links) are affiliate links, meaning that I earn from qualifying purchases. Learn more.