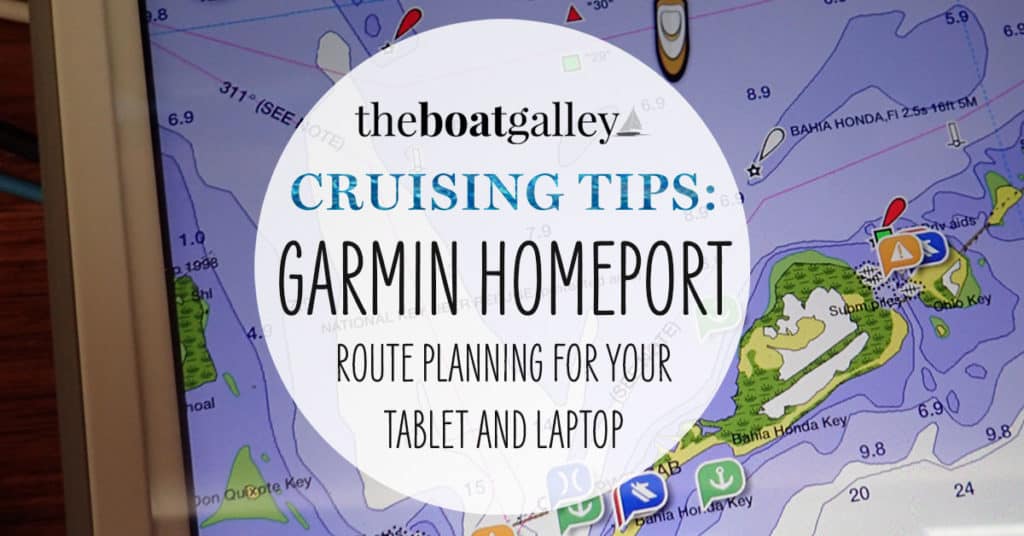 Garmin HomePort is a much easier way to create routes than trying to do so directly on a Garmin chartplotter. HomePort is a free app that works on Windows and Mac laptops and desktops, using your existing Garmin charts. It then lets you create a route using your mouse on the larger screen, zooming in and out to see the overall picture and also details of hazards.

If your chartplotter is wifi enabled (and you have it set up on a network with the laptop), you can transfer the route to your chartplotter via wifi following the instructions in your owner’s manual. Our old chartplotter wasn’t wifi enabled, so I used an SD card to “sneaker net” the data transfer and will give directions how to do this as it took a bit of trial and error. You can also save the route (as a .gpx) to use with backup navigation programs that you might have on a tablet or phone.

HOW TO INSTALL AND SET UP GARMIN HOMEPORT

HOW TO CREATE A ROUTE

This is how I create a route — the process is not exactly intuitive and I never found a good how-to. I am sure that there are other ways to create a route. I find it extremely helpful to have a mouse with a scroll wheel.

TRANSFER ROUTE TO CHARTPLOTTER WITHOUT WIFI

By default, the HomePort route is saved on the hard drive of your computer, not on the SD card. To get it onto the SD card:

Having a backup navigational program is critical. Unfortunately, HomePort cannot serve as a backup as it doesn’t allow for a GPS connection (I’ve tried — my laptop does have GPS) or route following.

Ideally, a backup program should run on a separate device with a separate GPS that is not connected to ship’s power. In other words, the systems should be totally independent so that if one piece of equipment goes down, it won’t take the backup down as well. I used to think that I had to create a separate route in that device. Then I discovered that I could export a .gpx route from Garmin HomePort.

There are two basic methods to get a route to another device — you can email it to yourself as an attachment or you can store it on a shared drive (Google Drive, Microsoft OneDrive, Dropbox or others) and import it on the other device.

The first step in either method is to export the route from HomePort in .gpx format. Click on the route that you want to export, then click File at the upper left of the screen. Select Export, then choose Export Selection (trying to export “My Collection” put all routes into one large file that I couldn’t do anything with). Save in whatever location you like — it’s good to create one folder to use for nothing but routes, but it can be either local or cloud-based.

To transfer to a nav app an iPad by email:

The obvious benefit of having a backup navigation device is in case your primary device has a problem. I’ll be honest: when I used to have to create a route from scratch in the backup device, I didn’t always do it. And I certainly didn’t do alternate routes on the backup device very often. Exporting from HomePort makes it easy, so I do it. Only once have we needed it — when an electrical blip turned off our primary chart plotter just as we entered a tricky area — and I was certainly glad to have our route already available to watch on the iPad!

Additionally, whichever of us is not actively “at the helm” has come to love being able to follow along on the iPad and not interfere with the display at the helm. Dave particularly likes being able to look ahead to see turns and prepare for different wind angles and sail trim without bothering me as I’m steering a twisty path through shoals.

You may also be interested in my new favorite iPad navigation app:

And how to connect a VHF AIS receiver to your Garmin chartplotter:

This post was originally posted in July 2017. It was last updated in February 2020 for changes in Garmin HomePort, accuracy and completeness.

675 Shares
Some links above (including all Amazon links) are affiliate links, meaning that I earn from qualifying purchases. Learn more.

Shopping for boat gear and parts? You may have more options than you think. Here are some great locations you should try. [More] Sources for Boat Parts