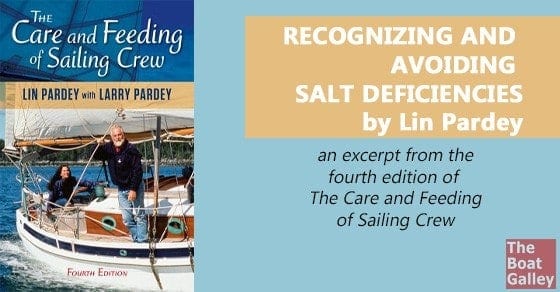 This is a guest post by Lin Pardey, circumnavigator and author.  Here, she talks about a problem that we frequently saw amongst those cruising the Sea of Cortez.  It can hit anywhere that it’s hot!

When Carolyn suggested I write a guest blog, she added, “It doesn’t have to be directly related to cooking on board, just something cooks might relate to.” She got me thinking about all the responsibilities that befall a cook once she heads offshore.

Not only is it usual for her/him to take final responsibility for provisioning, galley outfitting, food preparation and preservation but also the ultimate health of the crew. So I thought this extract from the updated 4th edition of my book, Care and Feeding of Sailing Crew, would definitely be relevant to many of you. It is from the chapter called: Health and the Cook

Recognizing and Avoiding Salt Deficiencies as You Voyage

In the tropics or in extremely hot summer weather, there is an additional health concern for the cook—salt deficiency. When people sweat profusely, their bodies use more salt than normal. If this isn’t replaced, headaches, severe muscle cramps, and irritability may follow.

During our recent visit to French Polynesia, I found more signs of salt deficiency among cruising sailors than in previous years. Probably 20 percent of the sailors from northern climes made comments about feeling lethargic, short-tempered, slightly faint, or clammy-skinned. (A check will often show lowered blood pressure—first sign of potential heatstroke.)

Several modern trends seem to have contributed to this problem. First is the use of watermakers, which remove almost all traces of salt from drinking water. Second is the current medical recommendation that people avoid unnecessary salt to help lower blood pressure. Third is the use of dodgers, which reduce the breezes that typically would flow through cockpit areas. This breeze normally combines with the sweat your body produces to cool your skin. Eliminate the airflow and you have created a high-humidity steam room that forces your body to sweat more than it otherwise would, depleting its salt supply more quickly.

Salt deficiency can creep up on you. During our voyage down the Red Sea, I developed cramps that were beyond the limit of most pains I’d had before. Both of my legs were affected, and for 30 hours I was unable to leave the bunk to stand watches. We’d had 10 days of 110° F. (48° Celsius) weather before the cramps developed, and I am not naturally a heavy salt user. Clouds covered the sky the day my cramps developed, and as the cooler weather reduced perspiration, the cramps slowly went away. But their weakening effects made walking difficult when we reached Aden three days later. When we spoke to the doctor there, he immediately pointed to salt deficiency.

Drinking alcoholic beverages also can contribute to salt deficiency. The ice-filled, cooling drinks taste so good that cruisers often forget to drink enough nonalcoholic beverages to compensate for the dehydrating effects of the alcohol.

One way of knowing whether or not you are drinking enough liquid in the tropics, and replenishing your salt supplies sufficiently, is to keep a casual check on how often you or your crew urinate. A safe average to shoot for is once every 2 to 2 -1/2 hours during waking hours.

The color of urine also is a good indicator. If you notice that it’s becoming darker yellow, you need to add liquid to your diet.

If you do see signs of salt deficiency, the cure is simple. Add 1 teaspoon of salt to a cup of natural, sweet-flavored juice—it will act almost like a miracle cure. The headachy feeling will usually begin to recede within half an hour.

But prevention is better than cure. In the tropics, add salt to your diet. Drink lots of liquid. Provide lots of ventilation inside the boat and use a bimini-type top for shade (or add opening windows to your dodger arrangement) to increase airflow.

Slightly off the subject but of great importance, since many of you reading this will be women: Don’t wear nylon panties or nylon bathing suits in the tropics. They will cause or aggravate cystitis, which is extremely painful and irritating. (Symptoms: pain when urinating, blood in urine, pelvic discomfort, slight fever, possible pain around kidney area.)

Nylon does not absorb perspiration, so it creates the hot, damp atmosphere next to your skin and private parts that will allow bacteria to incubate. For the same reason, men should also avoid wearing nylon trunks and shirts. Cotton is cooler and healthier.

As we meet many women with this problem, I carry dried cranberries (which we also enjoy using to spice up salads.) About three tablespoons of dried cranberries to a cup of boiling water plus a spoonful of sugar, produces a pleasant tasting infusion that quickly alleviates the discomfort of urinating.

The 4th edition of Care and Feeding of Sailing Crew, from which this was taken, was released on October 1, 2013. It is also available in print and as a Kindle book on Amazon.

Lin Pardey, who is currently living in New Zealand, voyaged over 200,000 miles with her husband Larry completing both an east-about and west-about circumnavigation on two self-built, engine-free cutters. She has also worked as cook on shrimp trawlers, charter yachts and race yachts. Together Lin and Larry delivered boats across many of the oceans of the world. You can read Lin and Larry Pardey’s newsletters and cruising tips at www.landlpardey.com.

365 Shares
Some links above (including all Amazon links) are affiliate links, meaning that I earn from qualifying purchases. Learn more.