You are here: Home / Other / Make a Better Pizza Crust 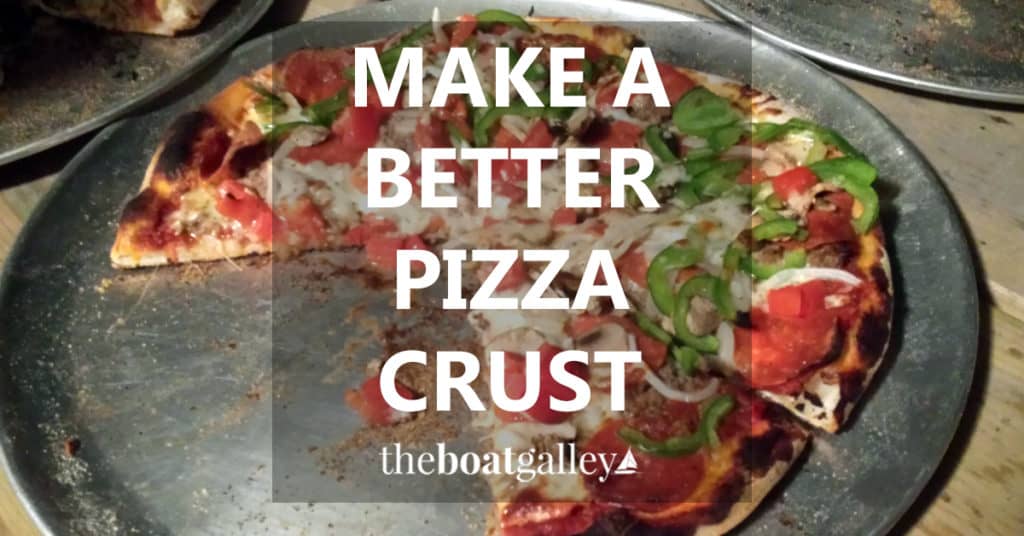 I’ve been experimenting lately to try to make a better pizza crust and finally discovered the trick for having a crisp, crunchy crust instead of a limp, doughy one.

My past efforts weren’t satisfactory because no matter what dough recipe I used, and no matter what temperature I set the oven at, I still had what I’ll call “limp pizza.”  Basically, pizza that you can’t pick up in your hand because the crust just droops.  Pizza where the crust just seems underdone or soggy with the sauce.  I tried partially baking the crust before I put the toppings on, I tried pre-baking and then flipping the crust over, everything.  I couldn’t get the type of crust I wanted.

Then I got an idea when I was making some No-Knead bread — what if I used a heavy pan and preheated the pan in the oven, as I did with the no-knead bread?  This has turned out to be the real secret!

Note:  Since you’re working with a hot oven and hot pan, only do this in a calm anchorage or marina.  And if your oven has any hot spots, you’re likely to burn the crust — think about getting a baking stone, which will even out the heat for everything you bake!

621 Shares
Some links above (including all Amazon links) are affiliate links, meaning that I earn from qualifying purchases. Learn more.

Doing the Great Loop? Or just exploring the mini loop of Florida? This handy guide has anchorages, info about bridge openings, locks, fuel pumps, and more to make your cruise a breeze! [More] Get the Florida Quick Loop Reference

Need to make a quick meal or want a tasty way to dress up fresh veggies? This easy peanut sauce might be just the thing. [More] Peanut Sesame Noodles