You are here: Home / Other / No-Added-Fat Sauteing and Browning 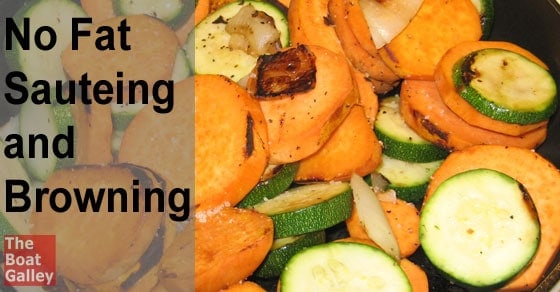 Most of us, I’m sure, try to eat at least somewhat healthily.  And that includes not adding fat or oil where we don’t need to.  I fight high cholesterol, high blood pressure and my weight, so I’m right in there.

A simple way to dramatically cut down on the amount of added fat and oil in your cooking is to use a little salt to saute or brown food.  Salt draws the moisture out of food so that it won’t burn.  As a young girl, I learned to pay-fry hamburgers by sprinkling a little salt in the pan, heating it up and then putting the hamburgers in.  More recently, I’ve experimented with this technique and found that it works for lots of foods.

Okay, you’re saying . . . this sounds like I’m just substituting one health no-no for another.  If you’re on a total salt-free diet, that’s true.  But most of us simply try to watch our salt intake.  Therefore, if you subtract the salt you’re using to brown the food from what you’d otherwise add, it doesn’t add extra salt.

Lots of cooking references suggest “browning” foods in a bit of liquid (such as vegetable juice, broth, wine or water) instead of oil.  My experience is that the liquid boils off before the food is browned, so you’re browning the food in an essentially dry pan — or, if you use more liquid, the food cooks but doesn’t really brown.

The other option is to use non-stick cooking spray.  But this does add a bit of fat (called “trivial” on labels) . . . and I figure why add it when I don’t need to?

362 Shares
Some links above (including all Amazon links) are affiliate links, meaning that I earn from qualifying purchases. Learn more.