You are here: Home / Other / More Tips for Perfect Boiled Eggs 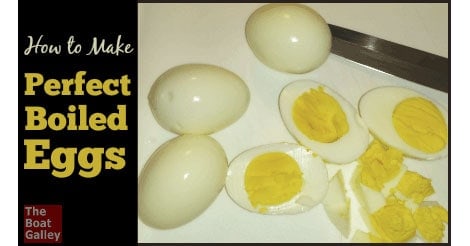 Boiling eggs seems like such an easy thing to do . . . but it can be hard to get them perfect.  So here’s a few more tips!

If you’ve ever tried to peel really fresh eggs, you might have ended up with something that looks more like a moon rock.  I know I have — and who wants to make deviled eggs from that?

Eggs do peel better when they’re at least a week old.  But we don’t always have the luxury of waiting — or you may not know how old they were when you bought them.

Cheap insurance is to add 1/2 teaspoon baking soda to the water. Cook them as usual and the shells are much easier to peel.

Special thanks to Wendi who left a note on my article about how to avoid the dreaded green line on hard-boiled eggs and told me this.  I got some very fresh eggs from a nearby farm and tried cooking some with and without the baking soda.  It works!

As a side note, I wondered if it was just the sodium and tried using more salt than normal in the water . . . those eggs were every bit as hard to peel as with nothing.  I’ve also heard that adding vinegar to the water would help with the peeling . . . don’t bother trying that one, either.

The final tip I’ve seen is to use a needle and poke a tiny hole in one end of the egg before boiling it . . . I broke three eggs trying to do this so can’t really say if it will work.  I’m not going to try it again.

If you boil older eggs, they’ll peel easily.  The trade off is that often the yolk won’t be nicely centered — not a problem if you’re making egg salad or potato salad, but not great if you’re slicing the eggs for a garnish or making deviled eggs.

This used to really be a problem since my eggs on Que Tal were frequently a month or more old.  And I never remembered to flip them every few days (see Which Way Up for a neat way to help remember — obviously from a reader!).  Then I learned a way to re-center the yolks . . .

Simple solution — lay each egg on the counter or in a bowl and spin it on its side.  I do it a couple times, moving the egg between times.  The yolk will center itself with the spinning.

If you don’t already know the secret, be sure to read my article on avoiding that nasty green line on hard-boiled eggs.

244 Shares
Some links above (including all Amazon links) are affiliate links, meaning that I earn from qualifying purchases. Learn more.