You are here: Home / Other / Liquid Smoke 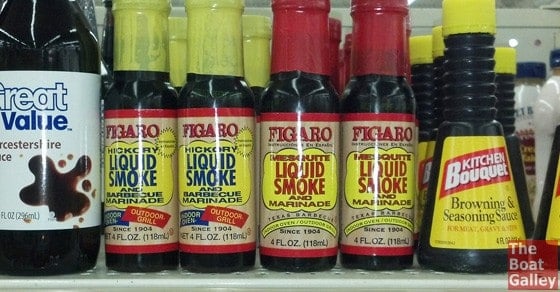 I had never heard of “Liquid Smoke” before we went cruising.  Then, in our second summer in the Sea of Cortez, my friend Tonya on Amazing Grace made this incredible smoked fish dip for happy hour one day.  When she told me that was how she used up “less desirable” fish that they caught, I was totally puzzled.  Obviously, even though they had a catamaran with far more space than we did, they did not have a smoker on board!

And so she told me about Liquid Smoke. While I never did find it in Mexico or El Salvador, bottles were small enough to bring back from trips to the US.

It seems that I’m not the only one who isn’t familiar with Liquid Smoke.  A number of Jan’s and my recipes in The Boat Galley Cookbook use it — particularly in appetizers and make-your-own BBQ sauces.  But a couple of readers have asked where to find it, as their local store doesn’t have it in the spice aisle.

Instead of the spice aisle, I usually find it near the Worcestershire sauce and barbecue sauces as shown in the photo above.  There are several brands, although I’ve never seen more than one in any given store.  And yes, it’s fairly cheap!

NOTE:  I just learned that some people can be highly allergic to Liquid Smoke (see the note in the comments), so be sure to let people know if you’ve used it!

Another good option is Hickory Smoke Powder, available from The Great American Spice Co.  While more expensive, it’s even more compact for tucking into luggage and there’s no potential leakage!

In addition to our recipes using Liquid Smoke — there’s one for BBQ Sauce here on TBG — you can add it to lots of other things for a little different taste.  Try a few drops in:

377 Shares
Some links above (including all Amazon links) are affiliate links, meaning that I earn from qualifying purchases. Learn more.