You are here: Home / Other / Last Minute “Marinating” 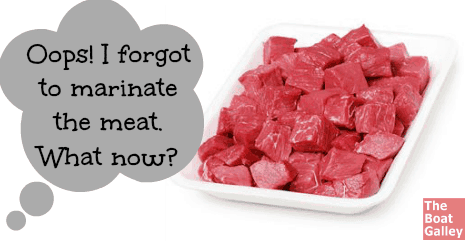 I seem to have a tendency to plan to marinate something — meat, chicken, fish, even veggies — and then get so caught up in doing something else that I totally forget about it. Until it’s time to start cooking dinner, that is.

I’ve come up with three ways to salvage the situation — not exactly the same as marinating for the full time, but still providing a lot more flavor than doing nothing. Different ones work best in different situations:

P.S. A couple of months ago, I got this Brinkmann Basting Set at Home Depot (also available on Amazon – click here), primarily because I wanted the little cup-and-a-half stainless pan to use on the tiny stove aboard Barefoot Gal. It’s turned out to be great for lots of things, including its intended purpose of basting while grilling! The pan is stainless, so won’t rust and the brush is silicone, so it won’t melt.

208 Shares
Some links above (including all Amazon links) are affiliate links, meaning that I earn from qualifying purchases. Learn more.