You are here: Home / Other / Keeping Trash on the Boat

I’ve written a number of articles about trash management, and anyone who has driven by a Wal-mart — or in a less developed country — knows the eyesore that wind blown trash can become.

And many boaters have heard of the Great Pacific Garbage Patch, although there are actually numerous patches.  Somewhat less known are the Atlantic Garbage Patches.  Actually, there are garbage patches in all of the oceans.  While no one has an accurate estimate of the size of these, we know they’re big.  And mostly plastic. 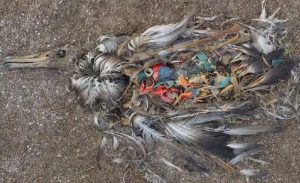 That is, securing everything so that things can’t accidentally fall into the water.  We’ve all tossed a water bottle into the cockpit, missed and had it go in the water . . . and haven’t been able to recover it.  Or dropped the top from a soda bottle.  Or had an bag of chips fly off the boat in an unexpected gust.  Had a wad of fishing line disappear.

Individually, they seem like little things.  Inconsequential.  But taken as a whole, they matter.  And the images from Midway (a film to be released later this year) — the same island of WWII fame, with only about 60 people living there in the middle of nowhere but located so as to have substantial amounts of plastic from the Great Pacific Garbage Patch wash ashore, show it.

While this film deals with one small island, the problem is everywhere.  And it’s not just on the water, it’s everywhere.  So please make every effort to keep all your “stuff” on your boat, in your car, in your daypack, whatever — and then dispose of it in the best way possible for where you are. If something goes flying accidentally, see if you can recover it.

And if you discover that the local government is just taking trash to a “dump site,” where the winds can scatter it, please try to keep it with you or find an alternate way to dispose of it (while I’m not really a fan of burning, in many places that we cruised, it was the best option).

Midway (the film) is described as:

The MIDWAY media project is a powerful visual journey into the heart of an astonishingly symbolic environmental tragedy. On one of the remotest islands on our planet, tens of thousands of baby albatrosses lie dead on the ground, their bodies filled with plastic from the Pacific Garbage Patch. Returning to the island over several years, our team is witnessing the cycles of life and death of these birds as a multi-layered metaphor for our times. With photographer Chris Jordan as our guide, we walk through the fire of horror and grief, facing the immensity of this tragedy—and our own complicity—head on.
<center><iframe src=”https://player.vimeo.com/video/30919668″ width=”640″ height=”360″ frameborder=”0″ webkitallowfullscreen mozallowfullscreen allowfullscreen></iframe></center> 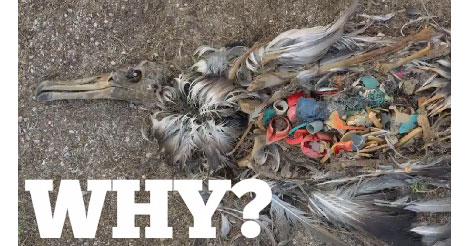 291 Shares
Some links above (including all Amazon links) are affiliate links, meaning that I earn from qualifying purchases. Learn more.