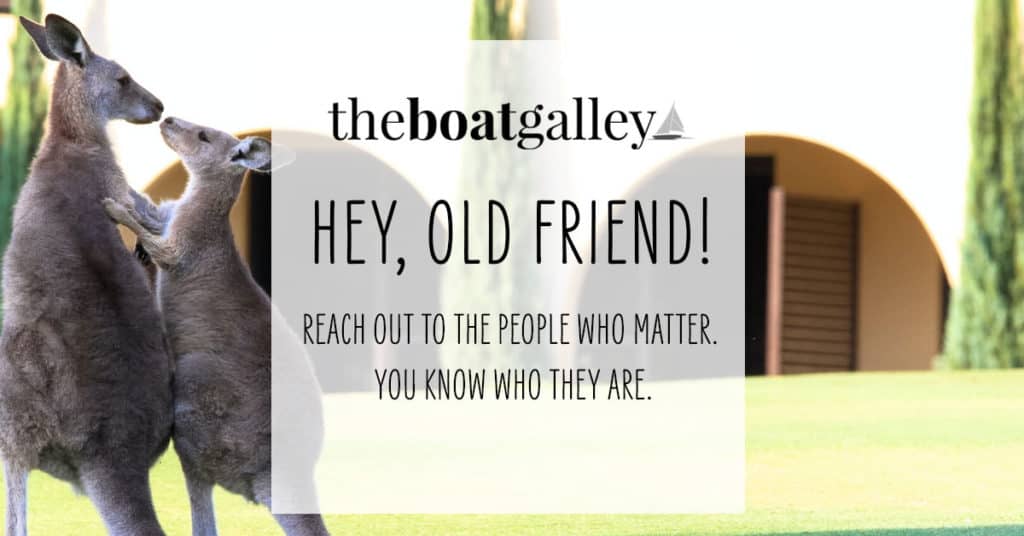 While cruising, you meet all kinds of interesting people. But can the ties you make survive the test of time?

Today’s guest post is by Julie Bradley, author of Escape from the Ordinary and Crossing Pirate Waters, international bestselling books based on an eight-year circumnavigation. And she shares about one important friendship that was a joy to pick up where it left off.

“It’s holding,” I said, peering over the bow of the boat as Glen gently motored backwards to set the anchor.  It was early afternoon and we had planned to get closer to Charleston, but when I saw Wadmalaw Island on the chart we had to stop.

“Wadmalaw.  The chart says this is Wadmalaw Island.  That’s where Heyward and Charlotte live. We have to find them,” I said.  “For all we know they live in one of those,” pointing to cottages on the bank of a creek.

I had lost touch with our buddy boat friends from the low country of South Carolina. It had been years and many email addresses ago since we last had contact and after a while I felt too embarrassed to reach out.

We met up with them twenty years ago while our boats were docked in the Pedro Miguel Boat Yard, just before the last lock within the Panama Canal.  The derelict marina was a leftover from when the US military had five bases centered around the Canal. The funky main building was a former officer’s club, with decaying remnants of a glorious past.  A communal kitchen and small number of sailors living inside the Canal forged strong and quick bonds as we marked time, waiting for the trade winds to set in before sailing across the Pacific.

Panama Canal is a Commitment

The Panama Canal is a filter for sailors. The two day passage through that path between the seas is the nautical difference between dating and marriage. Cruising sailors in the Caribbean are still dating, checking things out to see if they really want to go all the way around. Because once you cross the Panama Canal, that’s it. You are committed. The only way back to the east coast of the United States by boat is around the world. Pedro Miguel Boat Yard is where we made friends with Heyward and Charlotte, other ‘round the worlders, who sailed a Whitby 42 named Skimmer.

Our sailboats were docked inside the Canal and the wake from tugboats and colossal ships moved us around like a sock on spin in the washing machine. Nonstop action made it difficult to get a good night’s sleep so our solution was to use those months to travel to South America from the cheap airfare hub of Panama City.

Skimmer had the same idea and between trips we met up on each other’s boat, eating popcorn for dinner and swapping travel and sailing stories. Once the trade winds set in, we motored through the last Canal lock and took off for the Galapagos.

Buddy Boating Across the Pacific

It was a year of leapfrogging from island to island, running into Skimmer again and again across the Pacific Ocean. Places like Fatu Hiva, Raiatea, the Tuamotus, and Society Islands are etched in my mind with Charlotte and Heyward exploring on shore with us. Eventually our paths diverted when they went on to Australia and we sailed for New Zealand.  Keeping loosely in touch, we kept up through email until, well, we didn’t. Now, twenty years later and anchored on the very island where they lived, I yearned to hear the melodic quality of their Charleston accents and eat popcorn over lively conversations.  We had shared so much, and I refused to believe our paths would never cross again.

It’s rare for Mr Google to dig up cell phone numbers, but the internet magically offered up contact information for their son in Wisconsin. I texted a message—button pushing at its finest—and was kind of terrified when I hit send. It had been so many years. My insecurities kicked in, “What if they don’t want to see us? What if they don’t care anymore?”

Shortly after, my phone rang. It was Heyward and Charlotte.

Nostalgia is real.  Glen and I hovered over the cell phone like kids, excited to hear our friends’ voices after all these years.

I can’t tell you what a gift that was.

After all those years apart, I could still feel their friendship over the phone. Memories rushed forward of their smiles, kind words, listening ears, and small acts of caring in some of the most beautiful places in the world.

The next morning we pulled alongside their dock on Wadmalaw Island. The years apart melted as we laughed and told stories about what had happened in our years apart.  Most of which was wonderful to share, but bits were painful, even in the telling. But like the sailor who is proudest of a jury-rigged repair in the middle of the ocean, the broken and repaired parts of our older selves were displayed with pride. And the total acceptance of real friends.

Connection.  That’s all there is…. Reach out to the people who matter. You know who they are.

Julie Bradley, is the best selling author of two sailing classics, Escape from the Ordinary  and Crossing Pirate Waters (both available from Amazon).  Julie and her husband Glen have circumnavigated the globe and are now traveling the Great Loop.

164 Shares
Some links above (including all Amazon links) are affiliate links, meaning that I earn from qualifying purchases. Learn more.

Is your fuel system ready for a long passage? No matter what the conditions? If not, here’s what you need to do to prepare.  [More] How to Prep Your Fuel System for Long Passages