You are here: Home / Other / Making and Using Ghee 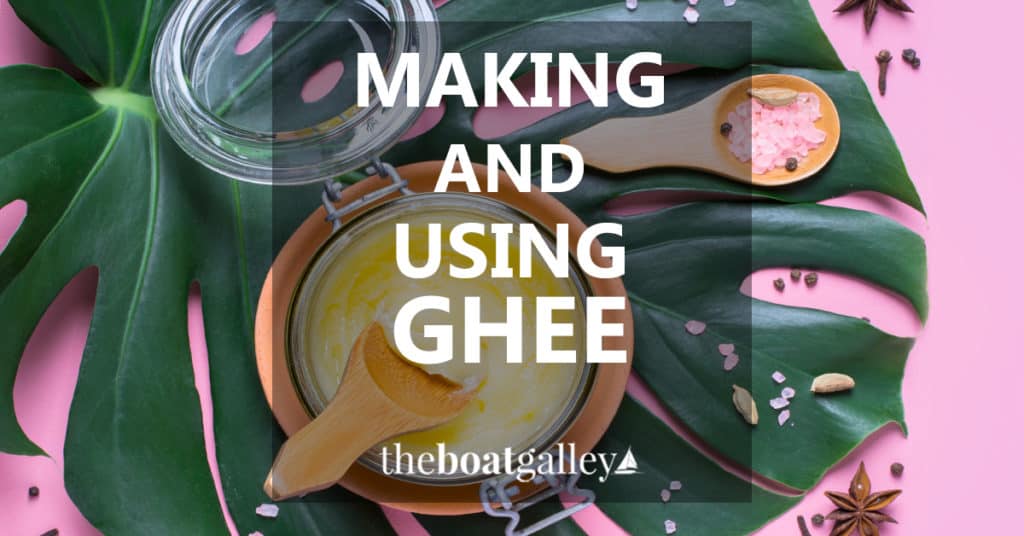 This was written by a TBG reader, Tara Lunn.

Ghee is a form of clarified butter.  It is made by melting butter and allowing it to simmer so as to separate the fat, solids, and moisture.  As it is simmering, moisture will evaporate; usually this is seen in a white froth that builds on top of the melted butter.  The milk solids will also separate from the fat, falling to the bottom of the pan as it boils.  The layer of golden liquid between the froth and milk solids is ghee.  A recipe is included at the end of this article.

Ghee is (mostly) casein and lactose free.  If prepared properly, milk solids are removed, leaving only butterfat behind.  Trace amounts of casein and lactose may remain in the ghee so use care if you are severely allergic to either.

Well-prepared ghee is also shelf stable as it has very little moisture.  Some sources say you can keep it for 2-3 months without refrigeration and up to a year with refrigeration.  Be sure to keep it in an airtight container and always use a clean and dry utensil to remove ghee so as to not contaminate it.  In the tropics it is much easier to contaminate ghee due to the high humidity. I generally make only enough for 1-2 months at a time.

Like any clarified butter, ghee is composed entirely of fat.  For this reason, use much less ghee than you would normally use of butter – one third to half as much.  Use it as you would use butter or oil in cooking.  Ghee is ideal for frying, roasting, and sautéing because of its high smoke point, almost 250C versus 200C for most vegetable oils.  It also has a fantastic flavor that generally compliments savory and sweet dishes.  I’ve used it in everything from Asian to American to Mexican to Italian and of course as it is traditionally used in Indian foods.

Replacing butter with ghee in baking is generally not recommended due to the different textures.  However, some sources consulted have had good results baking with it.  If a baking recipe calls only for oil, replace it one for one.  For general baking (cookies, quick breads, muffins), replacing oil with up to half as much ghee and some other liquid (water, milk, etc) yields good results.  For example, if the recipe calls for 1/2-cup oil, use 1/4-cup ghee and 1/4-cup water/milk.  The moisture and flavor remain with fewer calories!  To replace butter in a pinch, a bit of ghee with well-smashed apples, pears, or banana might work.  Some experimenting is probably necessary but this is a start!

I use ghee for everyday cooking, mostly sautéing, stir-frying, roasting, and flavoring rice, vegetable, bean and pasta dishes.  There are plenty of lists out there that describe ways to use ghee — one of the best is from Pure Indian Foods, where I got much of the information for this article.  I’ve never had a problem using it quickly.  Other than everyday frying or as a butter replacement, some other simple uses:

Ghee can be easily made with butter or purchased prepared in larger cities.  One online source for it in the US is Pure Indian Foods. However, in my cruising life through Central America and the South Pacific, I have never seen it.  A recipe for ghee follows:

Ghee, a shelf-stable version of clarifiied butter is easy to make and even easier to store–even when you don't have a refrigerator in your boat galley.
Print Recipe Pin Recipe
Cook Time15 mins
Calories:
Carbs (g):

Ghee will mold if there was any moisture left in the boiled butter or if it is otherwise contaminated.  Since I store mine in old salsa jars, which are not airtight, I’ve had mold form on the top.  I just scrape it off with a clean spoon and continue to use the ghee.

One 500g (1.1 pounds) block of butter will yield about 1 3/4 cup ghee.  I recommend making at least this much if you’re going to go to the trouble in the first place.

Some recipes say to use unsalted butter.  As some of the volume of this prepared butter is salt, and salt will fall out of the butterfat with the milk solids, you may end up with slightly less ghee than if you had used unsalted.  The taste or texture doesn’t seem to be affected.

Using good quality butter is not essential but is recommended.  Using a cheap brand of butter will result in less ghee, as cheap butter has more water and milk solids.  Each country generally has its own standards as to minimum amounts of butterfat in prepared butter.

Disclaimer: I am not a scientist or doctor. There are many resources out there regarding nutrition and home food preservation.

Consult a doctor or nutritionist before you make sweeping changes to your diet. I haven’t found anything that says ghee is terribly bad for you, especially when compared to trans fats.  I believe in traditionally prepared foods.  For high temperature frying ghee replaces trans fats nicely.

With respect to home food preservation, do your own research to find your best preservation method.  If milk solids or moisture remain in the ghee, there is a chance for bacteria to produce botulism spores (which have no taste or smell but are highly toxic).  This is a real risk with improperly home canned butter and other low-acid foods, but is lessened with properly prepared ghee.

239 Shares
Some links above (including all Amazon links) are affiliate links, meaning that I earn from qualifying purchases. Learn more.