You are here: Home / Other / Flying with a Small Dog 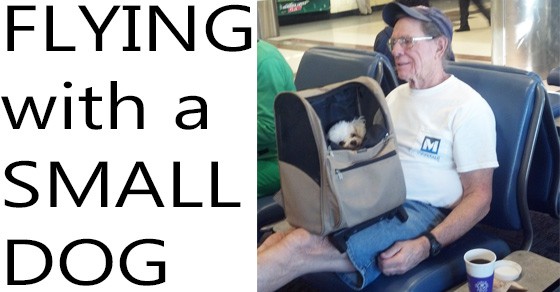 When we first adopted Paz, we honestly never thought about taking her on an airplane.  And if we had, I’m sure our reaction would have been “we’ll deal with that when we have to.”

Nine months later we had to.  Dave had some health concerns and wanted his brother — a physician — to oversee the tests and coordinate the various specialists (turned out fine).  Our boat, however, was in El Salvador and his brother in Florida.  We were going to fly and Paz was going to go, too.

We learned a great deal about traveling with a dog on that and other trips, and while I don’t know all the ins and outs of traveling with a dog — particularly with a large dog — I’d like to pass on what we have learned.  We have not traveled to/from the EU or the South Pacific.  Our experience is strictly within the US, Mexico and Central America where there are no quarantine requirements.  I want to emphasize that you need to research the requirements that will apply on your flights and to your dog!

For a small dog that will travel in the cabin, we found that a backpack style carrier worked best (but don’t take my word for it if your gut tells you something else is better for you and your dog).  Several people have asked me where they can get one like the one they see in my photos.  For years, I couldn’t find it again.  I recently happened to see it on Amazon:

It has held up for 8 years of use so far, and we use it at least a couple times a week on walks in addition to flights.  It’s starting to show its age.

As I was looking at it to make sure it was the same, I saw another backpack-type carrier that also looks good (dimensions are different for each of these; see which seems best for your dog):

As we see it, here are the things to watch for as you’re buying this type of carrier:

A few notes on using the carrier:

And some sort of miscellaneous notes on flying with a small dog:

There are no magic formulas for flying with a dog.  Preparation is key along with realistic expectations.  I can tell you what has worked for us, but you know your own dog and have to go with what you think is right.  And I don’t know a thing about flying with  dogs that are too large to travel in cabin!

143 Shares
Some links above (including all Amazon links) are affiliate links, meaning that I earn from qualifying purchases. Learn more.