You are here: Home / Other / Flavorful Food with Less Salt 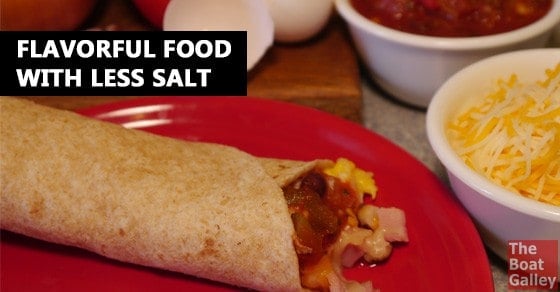 I’ve always thought that one of the benefits of cooking aboard a boat, where I cook almost completely “from scratch” is that it’s much healthier than using prepared foods or frozen foods.  Cooking from scratch, I control the fat, the types of fat, whole grain versus processed, the amount of salt used and pretty much everything about what’s “in” the food. Here are my tricks for producing flavorful food with a lot less salt.

So where does that sodium come from?  The FDA says about 10% of the total is just naturally in the raw ingredients that our food comes from.  We add another 5 to 10% at the table.  And the remainder — more than 75% — is added during food processing, whether in “processed food” or in the kitchen.  That’s where cooking from scratch on a boat gives us a HUGE advantage for keeping the salt down while still creating flavorful dishes.

Whenever possible, buy canned goods “with no added salt.”  Canned beans, such as kidney beans, black beans, navy beans and so on, typically have lots of salt added.  Two ways to decrease the sodium:

Two Simple Changes in the Galley . . .

I threw away all the “real salt” we had and replaced it with “Lite Salt.”  Lite salt looks just like regular salt, but is made of half regular salt and half potassium chloride.  Thus it has half the sodium per teaspoon . . . and potassium “can help blunt the effects of sodium on blood pressure” according to the FDA.  That doesn’t mean you can use an unlimited amount of Lite Salt, just that it’s generally a better choice (there are a few medical conditions — such as diabetes — where Lite Salt is NOT a good choice, so check with your doctor before switching).  I can’t stand the taste of “Salt Substitute” which is 100% potassium chloride, so don’t use it.  The 50/50 mix of Lite Salt tastes just like salt to me, so it’s no problem to use.

You can also get rid of garlic salt, onion salt and celery salt, and replace them with garlic powder, onion powder and ground celery seed.  Each of the “salts” is a mixture with roughly 50% of the “flavor” and about 50% salt, meaning that if you use 1/2 teaspoon of garlic salt per serving, you’ve added 1/4 teaspoon of salt per person.  Using just the flavor adds none, and lets you choose how much salt — or Lite Salt — to add.

To use garlic salt as an example:

I replace it with 1/2 teaspoon garlic powder and 1/4 teaspoon Lite salt, making it 300 mg. of sodium — a 75% reduction.  For someone with high blood pressure, this is still 20% of their daily allowance, so they may want to further reduce the amount of Lite Salt they’re using.

Note that I’m both using a lower-sodium choice and using less of it than the recipe originally called for.  I find that I don’t like using no salt, but I don’t need as much as many recipes call for in order for the food to taste good.  So the combination of using a lower sodium choice and using less of it makes it easy to stay well within doctors’ guidelines.

I’ve discovered lots of other seasoning choices, too:

And one more bit that doesn’t seem to fit in anywhere else:  whenever you’re using tomatoes (fresh, canned, sauce, paste, whatever), adding just a tad bit of sugar — in the range of 1/8 to 1/4 teaspoon of sugar per cup of tomato — really brings out the flavor of the tomatoes.  One note, though:  this is a chemical reaction and I have not found that any artificial sweetener (even Splenda) does the same thing.  Both brown sugar and white work.

361 Shares
Some links above (including all Amazon links) are affiliate links, meaning that I earn from qualifying purchases. Learn more.