You are here: Home / Other / What to Eat with the Stomach Flu 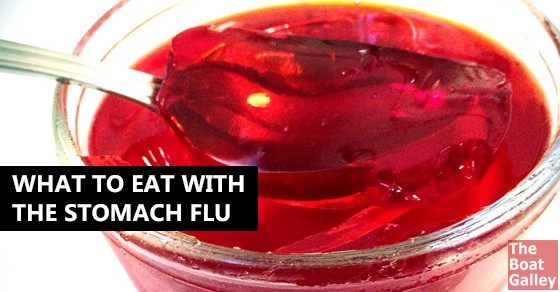 Stomach flu isn’t limited to those living ashore. It can hit you on the boat, in a remote anchorage. No stores nearby. As we’re stocking up for a Bahamas trip — where part of the time we hope to be in remote anchorages — I’ve thought a bit about various illnesses that could befall us and what we’d want . . .

None of us really plans to get sick with stomach flu, but it’s important to have foods aboard that won’t make the situation worse.

Thus, you might want to think about this when you’re provisioning — particularly if you’re going to be cruising where the shopping is limited.

A few caveats on this:

Instead, here are some things that are good to have on board both in the initial stages to keep you hydrated and get some calories into you, then as you recover and don’t want to upset your digestive tract as it returns to normal.

When you’ve had an episode lasting more than two days, you need to reintroduce solid foods very, very slowly to avoid irritating the digestive system.  It’s not uncommon to try to return to your normal diet too quickly and have a relapse, necessitating going back to clear liquids.

Dave’s brother said that we shouldn’t even begin to reintroduce solid foods until we’d had no vomiting or diarrhea for 12 hours, then begin with just a single spoonful.  Wait 6 hours, if there was no relapse, try 2 spoonfuls, wait 3 hours and try a bit more.  During this time, we supplemented the solid food with lots of the clear liquids.  He also noted that after a particularly nasty episode of “intestinal distress” it could take 3 or 4 days — even without a relapse — to slowly work back to a “normal” diet.

But it’s not just keeping the amounts small, you also need to start with foods that are easy to digest.  And again, that’s where having the right provisions aboard is crucial.

As the “first foods” are tolerated without a relapse, good ones to try next include:

Foods to stay away from:

All of these should be slowly reintroduced once you’re eating “normal” meals without them.

Digestive upsets can interfere with other medical conditions as well.  Again, I’m not a doctor, but this is something to be aware of and think how it might affect you.

If you’re just out for a day or two, just some Gatorade or Pedialyte aboard is probably sufficient.  But if you’re heading out where it would be more than a day to get provisions or medical help, you need to carry more of the needed foods with you. And I hope you never need them!

Have you discovered any other foods that are useful in case of a bout of stomach flu?

3.9K Shares
Some links above (including all Amazon links) are affiliate links, meaning that I earn from qualifying purchases. Learn more.