You are here: Home / Other / How To Buy the Best Duct Tape 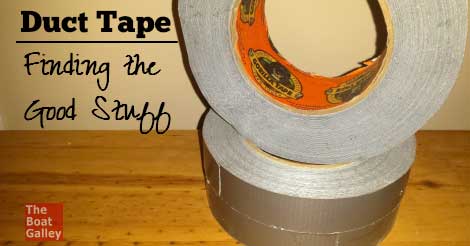 Most of us probably don’t want to admit just how often we reach for the roll of duct tape. We use it for everything from making quick labels to emergency repairs.

The really awful stuff is thin, stretchy plastic that tears just coming of the roll and won’t tear straight across where you want it to (it’ll tear maybe a half inch across, then start tearing lengthwise) and doesn’t stay stuck to anything for long. We’ve thrown almost full rolls of awful stuff away — it caused more problems than it solved.

Typical signs of the bad stuff . . . or what we learned to watch out for:

The good stuff tears well, doesn’t stretch and sticks well IF the surface is smooth:

And then we come to the really great duct tape: Gorilla Tape. We first learned about Gorilla Tape when we were cruising in Mexico and a friend gave us a roll when we were back in the US for a quick trip (you know it’s a good friend who “gets” your lifestyle when they give you duct tape as a present and it’s one of your favorite presents ever!).

Gorilla Tape is not cheap, tending to cost about $15 for a 35-yard roll (in contrast to the “good” stuff that tends to cost a little over $10 for a 50-yard roll). We tend to save it for the repair jobs!

Why is it so good? It has three layers (as opposed to two for the good stuff):

The adhesive is a different formula from most tapes in that freezing doesn’t affect it.

Because Gorilla Tape is almost twice as expensive as just “good” duct tape, we usually have both on hand as shown in the photo at the top of this article. Then we choose which to use based on what we’re doing. Labels and a temporary “extra hand” usually get the good tape, while McGyver repairs get the Gorilla Tape. I also use the Gorilla Tape for projects such as making a gel ice pack where I really don’t want the tape to fail in the freezer.

Most home improvement stores and big box stores with a hardware department will sell cheap duct tape as well as the good stuff and Gorilla Tape. Don’t be tempted by the cheap thin stuff — I’ve wasted way too much money on rolls that ended up in the trash.

If you just want to get it online, here are links:

344 Shares
Some links above (including all Amazon links) are affiliate links, meaning that I earn from qualifying purchases. Learn more.

Details about the differences between documentation and registration, and why you might choose to title your boat one way or another.  [More] Document? State Title? Which Do I Need?