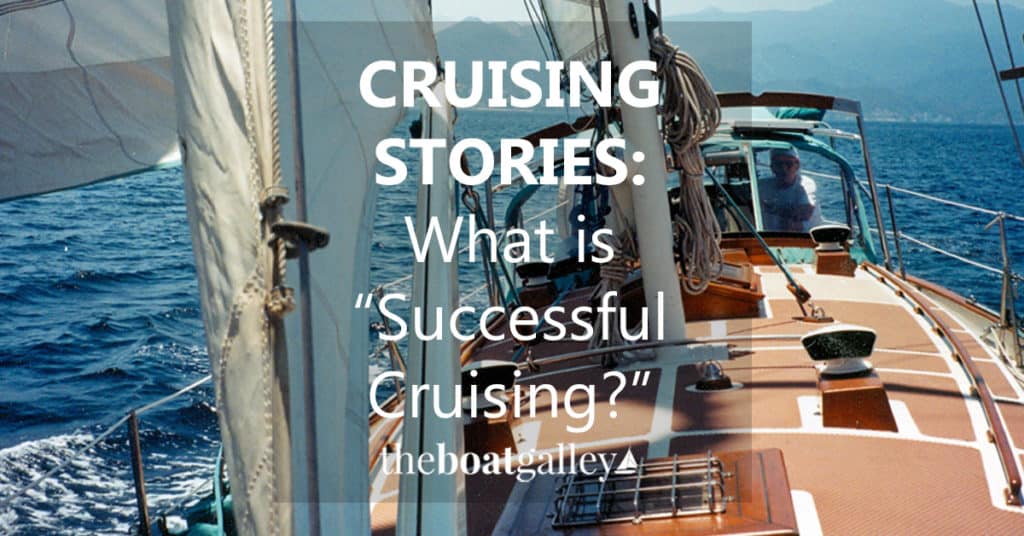 Cruising Stories are commentaries on the cruising life and its ups and downs. This week’s contribution comes from Jaye Lindner cruising aboard Cinderella with her husband Dan Lunsford.

Jaye originally published this on her blog, Life Afloat and she kindly allowed me to reprint it here. If you like her thoughts, you can follow Life Afloat (their blog page)or  Dan N Jaye (their personal page) on Facebook. I’ve known Jaye through her writing for several years; we finally met — all too briefly — in the Publix parking lot when they stopped in Marathon.

What Is Successful Cruising?

How do you define “successful cruising?” For some, it can be pretty objective. If you’ve set out to sail around the world, then you have achieved “success” when you’ve circled the globe and come back home. Or on a smaller scale, if you’ve set out to spend the winter in the Florida Keys, then you’re successful if your boat is still floating in the spring. But if your plans are less specific, then your definition of “success” gets fuzzier as well. Or does it?

A few of my friends have had to pause their cruising for a while recently, for extensive boat work, for medical issues, to earn some money. And one of them posted in his blog yesterday, certainly not defeated but almost apologetic, twice over. Seeming apologies once as though he was letting his readers down by not having new stories to tell. Seeming apologies a second time because he had always been a proponent of “go small, go NOW.” But after two years he and his wife had since decided that living on that much of a shoestring wasn’t fun, so they were going to take a break and come back with a comfier budget.

I posted back to him, “But, you have gone! You’ve had adventures, and learned, and are refining your original plan based on what you’ve learned. Think of it as preparing for the next adventure. Some days are wild and some days are … mild. And sometimes you just lay low while the bank account rebounds.” Plans evolve. Or as our cruising mentors have quipped, “Plans are firmly cast in jello.” “Plans are written in sand at low tide.” I’m pretty sure my friend will be back, just in a different way and timing than he first expected. With the additional self-knowledge gained from his experience, it will probably be better than ever, because he and his wife are smart like that.

Heck, we’re in somewhat in that not-quite-the-way-we’d-planned-it situation ourselves; between Dan’s hip surgery and recovering the expenses of 2017 from winter in the Keys to summer in Canada on El Galeon to Hurricane Irma to reclaiming the possessions stored in my BFF’s basement, Cinderella has been stationary the last year. And taking advantage of unexpected delightful opportunities is easier when plans are viewed as guidelines and not promises.

I thought we’d take Cinderella down to the Caribbean. It didn’t quite turn out that way. I had visions of jumping off the stern to go snorkeling every afternoon, like we did when we were on vacation. Our first cruise took us down the ICW to the Bahamas. Two months getting there, then we spent three months in the islands, learning and exploring, and then three months headed back to Annapolis where we started. After we returned we spent some time comparing the reality to the fantasy. What I learned was, you can’t be on vacation forever. Well, maybe you can. I can’t. I get bored, want to learn new things, make a contribution, be part of a community. We learned that we love living on the boat, and we learned that about three months at a time was about as long as we preferred to live out of the U.S./Canada. Actually we’d known that last, the three-month limit, about ourselves before, and had proved it to ourselves multiple times; this latest was just reconfirming that. So our plans evolved, as plans are wont to do. We still have plenty of time in the Caribbean every year, just, not year round and not on this boat.

With what we’ve learned about ourselves so far we are designing a cruising life that fits our personalities even better than the one we first visualized, and it continues to evolve. Ours, we have now learned, involves tall ships, and road trips, and periodically, something new and wildly different. (Got one coming up this fall that I’ll tell you about soon!) That’s also part of the freedom of living a possession-light life, on a boat. You get to change your plans easily. When your only new year’s resolution is, “have more adventures,” it’s pretty easy to declare the resolution honored. I never set out to be a great sailor. I wanted to have a great life, while sailing. I call that, “success.”

This piece really hit home with me, as our cruising plans have changed so many times over the past 16 years. We learned what we enjoyed and what worked for us, we lived ashore for a few years, we decided we wanted to be back on a boat, we’ve dealt with medical issues and had a financial setback when we lost our virtually free health insurance when Dave’s former company went bankrupt. Now Dave’s age (80) is leading us to have more of a home base. We didn’t get to the USVI as we had hoped a couple of years ago — a chronic infection, surgery for it and then recuperation made it impossible.

Does that mean we failed? I certainly don’t think so! We’ve cruised somewhere over 10,000 miles (I think actually over 12,000), on our own boats, on friends’ boats, on charters. In the Pacific and Atlantic Oceans. The Sea of Cortez, Caribbean and Aegean Seas. The Inside Passage and Glacier Bay, Alaska. Gone through New York Harbor. Now we’re exploring the Florida Keys. All have been adventures!

140 Shares
Some links above (including all Amazon links) are affiliate links, meaning that I earn from qualifying purchases. Learn more.

If you’re looking for a great sailing adventure video, I have a good one for you! [More] Arctic Sailing

Finally hitting the boat show on our own boat, and what we learned about Annapolis as a cruiser.  [More] Annapolis by Water!

Ready to decorate your boat for the holidays? But don’t want to store lots of stuff or discard it afterwards? Here are some great ideas for a festive boat that are affordable and friendly to the environment. [More] How to Decorate for the Holidays: Environmentally Friendly & Space Saving