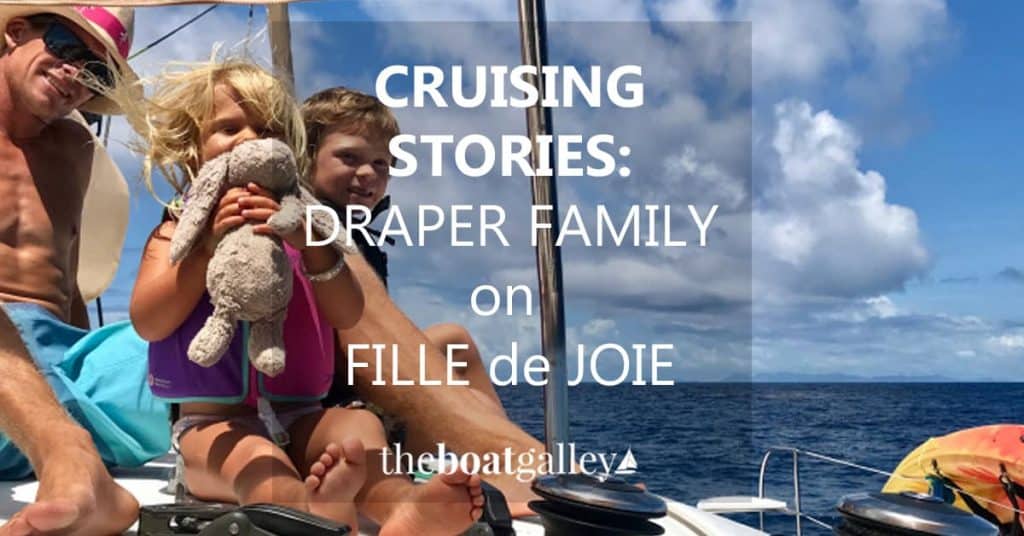 “H” and Chris Draper have been cruising the Caribbean with their two children, Harry (7) & Lily (5), for seven months now aboard Fille de Joie, a Lipari 41 catamaran. They’re both very experienced sailors, having met on the youth sailing circuit in the UK . . . and Chris was the wing trimmer and tactician for SoftBank Team Japan in the America’s Cup held last year in Bermuda.

Despite having been together for ten years, living aboard and cruising has been a huge lifestyle change for “H” (a physiotherapist). In this brutally honest post from her blog, she details what she’s found difficult and the adjustments they’ve had to make.

Many thanks to “H” for allowing me to share this as part of the Cruising Stories series — a collection of the real-life ups and downs of the cruising lifestyle. Follow her blog at Adventures on Fille de Joie or her Instagram.

So we aren’t sailing this week. We are missing our lovely boat though and we’ve been reflecting on the last 6 months of awesomeness. We are beyond lucky to have spent so much time together. Living the dream hasn’t been without its challenges and I’ve deliberated whether to write about the biggest one but here it is in all its honesty….!

The biggest challenge has been adjusting to our new roles…. I guess on land I was used to running the show while Chris put in big hours with the team on the AC campaign. I’d be doing the usual parenting thing like millions of other people – juggling and yes it was a whole lot less than others but it was juggling for me. Truth is I was super lucky and had a sweet life.

I took up running to fulfill a few of my own goals while Chris spearheaded his. I trained before Chris left the house, there was the 50-minute school run which was impressive on a tiny Island. I had a part-time Physio job at an awesome clinic. I ran the over-scheduled kids all over the place to all manner of after-school activities (ballet, sailing, CrossFit kids, swimming, Lego club, Aerial skills etc etc) and we had play dates and birthday parties in some stunning corners of Bermuda. I’d then fit in attempts at nourishing the kids’ souls with something they would eat (Ok that’s mostly anything white for Harry). I’d try in vain to get them to bed at a decent hour and yep I made attempts at studying on top of that.

Life was bursting full and super busy, just the way I like it. It was pretty much a challenge to get to the end of the day in one piece & I was always the hot mess at the school gates. What do they say…it takes a village.

Rocking on our own meant that if we wanted to spontaneously change our plans then we did (or I did on the kids’ behalf). We lived in frigging paradise with a whole posse of amazing families and badass women from the AC, from Bermuda, from school, work and with legendary neighbours round the corner! If we were super lucky we even got to see Chris!

Fast forward 6 months and suddenly there was no schedule. I hadn’t set myself some crazy arsed goal to achieve and we were all together 24/7, also the tribe of badass friends were gone! There was a new captain quite literally aboard the ship and he even wanted to have input on the food shop….

The struggle of living aboard a stunning 40ft catamaran in the Caribbean was real!! Joking aside, it has been an adjustment. We both wanted to be 100% involved in the boat and not just the sailing. Obviously, one of us may be SLIGHTLY more experienced than the other at racing boats, but I’m fairly sure there wasn’t an engine or water maker or an electric toilet on the AC50…

When we moved onboard I was fairly vocal (no surprises there) that we should do 1 for 1 of docking, anchoring, nav etc. We both had to learn new skills & I was adamant I didn’t want to be left behind. Chris wanted us both to get good at our own roles & in reality I know he wanted to feel 100% confident & in control of our life’s investment. So we had a stalemate for a while & then I backed down and we fell into roles. Similar things happened with maintenance. I’m as happy to decipher a manual as well as the next cruiser. Funnily enough, my vagina does not prevent me from processing the written word & getting stuck into problem-solving. The two little people, however, have other ideas!!

In reality for two of us to work on boat maintenance or sorting a water maker or whatever issue has arisen means that the kids are being left to their own devices & generally causing havoc. It doesn’t work. The goal driven girl in me, that is desperate to achieve something or learn struggles with this…

As frustrating as I’ve found it to admit I am slightly better equipped in the patience department for dealing with the kids and letting Chris deal with a boat issue without the distraction of the kids and obviously making sure everyone is appropriately fed and watered.

As for boat-schooling. I feel it is super important that our children get an influence from both of us on the education front. Inevitably if stuff is being fixed and there is always boat-work to be done, then school generally falls to me. In reality whilst it is a massive challenge, it is pretty rewarding to help your kids to learn, even if they are writing stories about poo! What an amazing opportunity to get….Because it’s me, my main fear is that I’ll fail at it and the kids will be the ones that pay the price! If Lily rocks back into school one day unable to read, that will be on me- yikes!

Time to have a shift of mindset! We are a team in life and on this boat of ours. The adventure and journey itself are the goal Chris & I dreamed of. If that means I have to be put back in my box every so often, jog on & do the domesticity bit while Chris fixes stuff- so be it. From speaking to other cruisers this adjustment is most definitely not unique to our boat or life. Whatever the hell works for you on your boat and in your life is a-ok.

Let’s face it when Chris is flying off to sailing events next year I better be able to put my money where my mouth is, step up & own the other half of the roles too….ummmmm.

262 Shares
Some links above (including all Amazon links) are affiliate links, meaning that I earn from qualifying purchases. Learn more.