You are here: Home / Other / Composting Heads

I previously talked about holding tanks and what size is reasonable for actually living on a boat.

One way to get away from a holding tank is a composting toilet. A few years ago, a boat with a composting head was a rarity. Now they’re becoming much more common.

According to people to have them, there are several advantages:

There are three main brands of composting heads for the marine market:

We are seriously considering switching to a composting toilet aboard Barefoot Gal and I know of several other people who are also thinking about switching. UPDATE: yes, we did switch to a Nature’s Head and are very happy with our choice.

If so, please leave a note with the brand you have, how long you can typically go between emptying the liquids and the solids, features you particularly like/dislike about the model you chose or composting toilets in general, and — if you installed it yourself — how difficult the installation was and how long it took.

Learn more about buying and owning a boat, gaining skills, working on your boat, buying stuff for your boat and moving aboard in Prepare to Cruise (free mini-course). 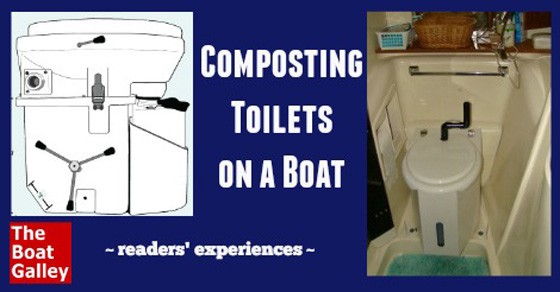 130 Shares
Some links above (including all Amazon links) are affiliate links, meaning that I earn from qualifying purchases. Learn more.