You are here: Home / Other / Compostable K-Cups? 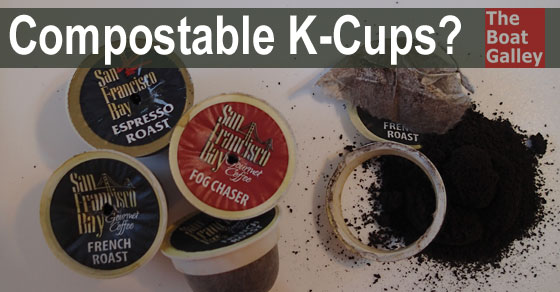 When I wrote about using a Keurig Coffee Maker on a boat, I mentioned that I had discovered some compostable K-Cups and would report on them after I’d used them for a while.

I bought 4 boxes of them — Espresso, French Roast, Fog Chaser and Donut Shop — not knowing which would be our favorite.

I really wanted to like these little pods, called Rogers Family Coffee One Cups.  You can buy them directly from the company or in larger quantities (at better prices) on Amazon.  Buying them in 80-packs on Amazon is one of the better deals I’ve seen on K-Cups, although they’re still not “cheap.”

Unfortunately, there are a number of reasons why I’m just not thrilled with them and don’t intend to buy more:

Another point is that their shipping is slow.  It took 8 days from ordering to receipt — and shipping was by UPS.  If you’re used to getting something by UPS in 2 to 3 days, you definitely have to allow more time! Not a deal-breaker by itself, just an annoyance.

All that said, Rogers Family Coffees are all fair trade, many are hand-picked and/or organic.  I think they’re on to a great idea here, with compostable K-Cups, but the idea just needs more refinement to make it really work.  Right now, the work involved and the length of time for the pods to break down just make them impractical for all but the most dedicated.

I find it a lot easier to use my favorite coffee in the reusable K-Cup with a compostable filter which makes it much easier to dump the grounds.  Initially I found it a bit of a pain to fill the container and it’s gotten a lot smoother with practice.  Using a refillable K-Cup is also cheaper.  I got my set up on Amazon, although some larger grocery stores are now carrying them too:

Has anyone else tried the pods from Rogers Family?  What are your thoughts?  Please leave a note in the comments!

351 Shares
Some links above (including all Amazon links) are affiliate links, meaning that I earn from qualifying purchases. Learn more.