You are here: Home / Other / 4 Ways to Avoid Burned Food 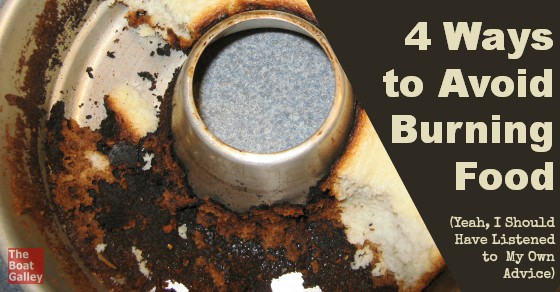 Long before Dave and I went cruising, we did a lot of camping.  And I had the same problem then as I did when we first began cruising.  Call it what you will — scorched, burnt, burned — blackened food seemed to be my specialty.  In time, I learned four important lessons in avoiding burnt food:

Probably the biggest reason I burned things on the boat (or when camping, for that matter) was that other things took my attention from what I was cooking.  Another boat anchoring nearby, a gorgeous sunset, dolphins jumping, friends stopping by in their dinghy . . . all of these could call me up on deck.  And I’d forget to check on what I was cooking until it was too late.

OK, you’re laughing, we all know you have to pay attention when you’re cooking.  And I’ve been cooking for enough years to know it.  But there are just so many more distractions on the boat.

My solution was to wear a watch with a timer and set the timer for 5 minutes (repeating) whenever I was cooking something that needed attention.  (And yes, I wear a men’s watch so the numbers are big enough to read, and it’s waterproof so I can wear it all the time.)   If you don’t want to wear a watch, a timer with an escalating buzzer (Update: the timer with the escalating buzzer is not always available; this timer has an 18-second alarm which is hard to ignore) will ensure that you’ll hear it even if  up on deck.

Yes, it really helped me not to burn food any more.

My second problem was that I was a cheapskate.  I didn’t want to spend money on pots and pans and thought that I could get by with the cheap camping set.  I’d used them camping and hated them, so I don’t know what made me think I’d like them any better on the boat.  And after just a week, I decided that it didn’t pay to be such a cheapskate — I could easily ruin as much food in a month as a decent set of pans would cost me.

I got a wonderful set of nesting stainless pans that were designed for boat use (see my complete article about recommended pots and pans for a boat).  They were much heavier, resulting in far more even heat distribution and no hot spots.  I’m not saying you have to go out and get the most expensive “gourmet” pans there are (sure, they’re nice, but they’re not in most cruisers’ budgets) but the $20 sets just aren’t worth buying.  If you can only spend $20, I really think you’re better off buying ONE decent pan and using it for everything.

Okay, this is another one of the “Mr. Obvious” ones.  But if you’re simmering something, using the lid will ensure that the steam stays in the pan and the food doesn’t dry out, which can also lead to scorching and burning.  And if  you have the lid off because you’re trying to reduce the liquid in something, you really need to stand over it.  I’ve learned my lesson the hard way.

Sometimes, no matter what you do, you just can’t turn the burner down far enough to avoid burning food.  And that’s where this wonderful little gizmo comes in.

Called a “flame tamer” or “heat diffuser,” it’s ingeniously simple:  you just set it on the burner under your pan and the air chambers in it help to “tone down” the amount of heat the reaches the pan, plus even the heat out.

This style is available for less than $10, sometimes even less than $5.  I’ve also seen heavy cast iron heat diffusers that go for $30 or more.  The cheaper ones work just fine and are much lighter weight to carry on the boat (not to mention if you should drop it on your toe!).

I was a little worried about the fire hazard with the wooden handle on a gas stove — what if it slipped with the motion of the boat?  It took about 30 seconds with a hand saw to cut the handle off, and now it takes up a lot less stowage space as well.

If your pans are on the thin side but you really don’t want to get new pans, a heat diffuser can solve problems when simmering foods, although it can’t really be used when sauteing (generally the pan won’t get hot enough to allow browning).

An added benefit of a flame tamer on a boat is that it eliminates the need for a double boiler.  Anything that you would have used a double boiler for, you can usually cook in a saucepan over the lowest possible heat if you use the heat diffuser.  And you can also “bake” bread on the stovetop with a Dutch oven and your heat diffuser.

A boat stove shouldn’t be hard to produce great meals with.  And the problems that I had in the early weeks of our living aboard were really of my own making.  Once I got some decent equipment and figured out ways to deal with the distractions that living aboard offered, I didn’t burn our food any more.

138 Shares
Some links above (including all Amazon links) are affiliate links, meaning that I earn from qualifying purchases. Learn more.