You are here: Home / Other / Bluapple 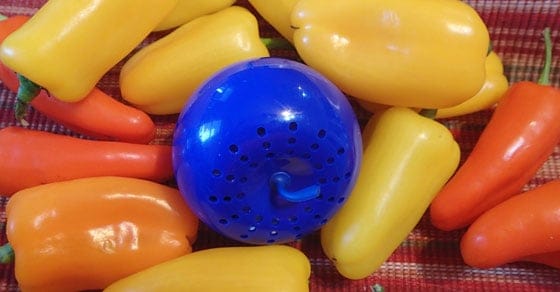 So what’s a Bluapple?  Three months ago, Belinda left a note via Facebook that she used a “Blue Apple” in the refrigerator with her produce and it worked great to keep food from going bad.

Curious, I bought one and began using it.  As with everything, there are pros and cons . . . but the bottom line is that it’s a keeper.

Overall, I’ve been quite impressed at how long my produce has lasted, but you still have to start with food that’s in good condition, with no bruises or soft spots.  The down side is that it has required me to make some changes in how I’ve arranged the refrigerator.

The Bluapple is a small plastic container — a little smaller than a tennis ball — with a replaceable packet inside.  The packet absorbs ethylene gas, which foods produce as they ripen and which also causes nearby produce to ripen . . . or over-ripen.  You put the Bluapple in with your veggies to absorb the ethylene, and replace the little packet every 3 months.

Basically, ethylene gas is the science behind that “one bad apple” spoiling the whole bunch.  One bit of over-ripe produce will trigger other foods to also over ripen, go bad and rot.

By absorbing the ethylene gas, the chain reaction is halted.  Produce stops its own ripening as well as not affecting other foods nearby.  In the photo above, I’ve had those those mini-peppers almost two weeks and they are still fresh and crispy.

At the same time, however, I still have had a few things go bad.  It seems that food that was bruised when I bought it went on to rot (tomatoes in particular).  A package of carrots still dried out and I had to rehydrate them.

The company recommends using a Bluapple in a crisper drawer of a refrigerator so that it’s not trying to remove ethylene gas from the entire refrigerator.  And it notes that you can’t seal up veggies in plastic bags since the ethylene gas given off has to be able to go from the produce to the Bluapple.  It’s these requirements that I find less than ideal.

For boaters, those requirements may mean some changes in how you store produce in the refrigerator.  Powerboats and catamarans might have crisper drawers, but most monohull sailboats don’t.

I’ve always liked using ventilated open-top bins to store produce, as these allow cold air to circulate but the solid bottom contains any mess if something does rot.  I’ve always put each veggie in its own sealed plastic bag in the tubs.

To use the Bluapple, I left my produce in plastic bags and poked holes in each bag with a fork (some things were purchased in bags or containers that had holes; I just left those in their original packaging).  Then I used some very inexpensive lidded bowls to hold all the bags — long term, I’ll get better lidded containers, but I had these from a sailing club event and I wanted to test the system before buying new bins.  I put as many bags as I could in each bowl, added a Bluapple, put the lid on and put the whole thing in the refrigerator.

If condensation in the refrigerator is a problem where you are, put a couple of paper towels in the bottom of the bin under the bags — they’ll absorb the moisture; you can dry them and re-use them.

What I’ve learned about storing food with the Bluapple:

I have not seen the Bluapple in any local stores.  You can get it online both directly from the company and from Amazon.  The price is about the same, although you can get free shipping on Amazon if you’re a Prime member or meet the minimum order size:

Be sure to store the extra packets in a Ziploc or other airtight container — it comes in a foil pouch with a zip top, but I find that the zipper pops open on its own, so put the pouches in a Ziploc instead.  If you have a vacuum sealer, you could seal them, too.