You are here: Home / Other / Baking Powder: Tips and Substitutions 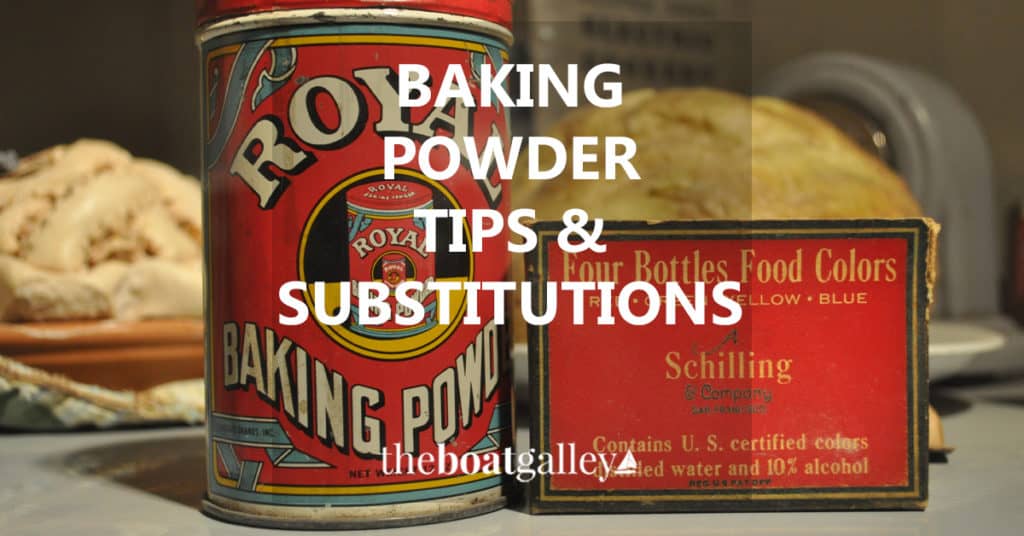 A month or so after we moved aboard Que Tal, I noticed that my pancakes and muffins weren’t as light as they had been.  A few weeks later, they weren’t just “not as light” — we could use them as sinkers on the fishing line.  I’d never had this problem before and I wondered if I was doing something different.  It turned out the problem was my baking powder.

No, not the brand of baking powder that I was using, and not the fact that I had bought it in Mexico.  It was how I was storing it.

Even though the can has a plastic top to put back on once it’s opened, that plastic lid just doesn’t fit tightly enough to keep the humid air out, day after day.  Over time, it seeps in.

Once in a while, I’d find baking powder in a foil-lined cardboard container, similar to a Pringle’s can but smaller.  Twice I bought it — it was all that was available — and both times it was DOA.  Don’t waste your money.

If you have enough room, the best way to store open baking powder is to put the can inside a Lock & Lock container (Rubbermaid Lock-Its are also good) or other plastic storage container that’s really airtight — just putting it in something like an old yogurt container won’t do it.  Take the can out just long enough to measure out what you need — don’t leave it sitting out the whole time you’re making something.

My storage space on Que Tal was limited enough that I was willing to make a little compromise — I stored the baking powder in double freezer Ziploc bags, which took up less space but also didn’t protect the baking powder as well.  A can would last about 4 months before noticably affecting my baking.

Tip 3:  How to Test Baking Powder to See If It’s Good

If your baking powder is hard in the container, or has lumps, you might want to test it before using it and being disappointed with the results.

To test, mix 1 teaspoon baking powder with 1/2 cup water.  If it bubbles and foams, the baking powder is still good.  NOTE:  just a couple of bubbles isn’t what I’m talking about — it won’t bubble as much as when you pour a can of Coke into a glass, but if it’s bubbling sufficiently, you really won’t wonder if it’s sufficient.

Okay, so you’ve just figured out that your baking powder is dead and you’d rather stay anchored out than run and get some — or the nearest store with any might be several days’ sailing away.  If you have baking soda on board — and you always should have a good stock for cleaning, in addition to cooking — it’s no problem.

487 Shares
Some links above (including all Amazon links) are affiliate links, meaning that I earn from qualifying purchases. Learn more.